I saw a lot of combat in the Korean War. Some were small firefights, others were among the most important battles of the entire war. While all the battles were highly significant, the one that stands out above the rest was the bloody 17-day battle in subzero weather at the Chosin Reservoir where we were outnumbered by the Chinese 8-to-1. It has been called by many historians one of the fiercest battles in Marine Corps history.

But our journey to the Chosin Reservoir there were other significant and historic battles. The first was the desperate battle at the Pusan Perimeter at a time when the war was going badly for our side. The second was the daring amphibious landing at Inchon followed by the bloody Second Battle for Seoul.

As we entered the Port of Pusan, every Marine sailing on the USS Pickway was standing on the deck watching a chaotic scene of ships from various United Nation (UN) countries hastily offloading troops, equipment, ammunition, food and other supplies. In the distance we could hear continuous explosions. Once our ship docked, we quickly moved ashore. Within an hour, we were rushed into the westernmost flank of the perimeter to fight off the North Korean Army mounting a major drive to overrun that side of the perimeter.

Within a day, our brigade became part of Task Force Kean, a combined Army and Marine force ordered by Army Lt. Gen. Walker, the 8th Army commander in Korea.

For three days of heavy fighting, the battle lines moved back and forth until our task force, supported by Corsairs from the 1st Marine Aircraft Wing, clobbered the North Korean Army, forcing them to retreat north. A few days later, they began attacking again in greater numbers and again, pushed back our lines toward the Port of Pusan. 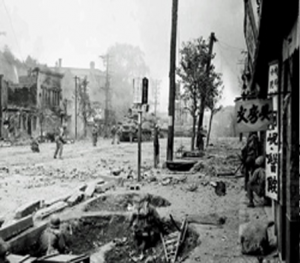 Several large and bitter battles were waged along the Naktong River were both sides suffered heavy casualties. I remember sitting on a hill overlooking the river as Marine Corsairs pounded enemy soldiers crossing the river. Hundreds were killed and wounded. The next day, I watched Corsairs wiping out a large column of North Korean motorcycles. By nightfall on August 18, although many of the North Korean units had been annihilated, those remaining fought with fierce determination. Eventually many were killed, wounded or captured. The enemy units that did survive retreated north toward Seoul.

When the Battle of the Pusan Perimeter ended in early September, the 1st Provisional Marine Brigade had suffered 500 casualties and was preparing to evacuate to Japan. In one month we had seen enough death and destruction to last a lifetime. But that’s not what happened. Along with Marine reinforcements from Camp Pendleton, our brigade re-formed into the 1st Marine Division under the command of Maj. Gen. O.P. Smith. I was assigned to Gulf Company, 3rd Battalion, 5th Marine Regiment. Within a week we made the daring landing at Inchon on the western edge of South Korea just below the 38th Parallel.

On September 14, 1950, every Marine in our regiment was standing on the deck of the transport ship USS Diachenko watching destroyers and cruisers bombarding the North Korean defenses at Inchon and the island of Wolmi-do, where, the next day, my Marine regiment was to make an amphibious landing. We were to be the lead element. I was absolutely certain we were about to enter the meat grinder.

At 6:30 on September 15, my buddies and I climbed down the cargo nets into an awaiting LST (Landing Ship Tank) bobbing in the water. As we scrambled aboard, our planes were softening up the beach with bombs, rockets & 20mm machine gun fire. The USS Missouri was pounding the shore line with its 16-inch guns. As the preparation fire began to slack off, we began our journey inland, nervously waiting for enemy indirect fire to take us out at any minute. That didn’t happen. When we did get ashore on the northern side of Wolmi-do, resistance was light. By noon, we captured the entire island at the cost of just 14 casualties.

The next day we joined other units in the battle for Inchon and by the afternoon, the city was in our hands. Because the North Koreans had not expected an invasion at Inchon, not many troops were defending it. It was a different story as we moved overland to Seoul. The North Koreans fought us every inch of the way.

Before we could actually enter the city of Seoul, we had to cross the wide Han River. North Koreans had placed major artillery positions on the other side and as our regiment crossed in nearly 100 “Ducks” (amphibious trucks), we were under constant bombardment. From our side of the river, we let loose with massive artillery barrages. The date was September 22, 1950.

With shells from both sides roaring over our heads, we moved across the river expecting any moment to be shot out of the water by enemy artillery and mortar fire. Some Ducks were hit and many Marines died. Somehow, none of our company’s Ducks were hit. Our advance on Seoul was slow and bloody. The enemy was heavily fortified and our casualties mounted in desperate house-to-house fighting.

We had done some house-to-house fighting but not on such a large scale. The second day of the battle for Seoul, we were in the outskirts of the city when we ran into a well-fortified enemy company. Each time we advanced on their positions, we were cut down my heavy machine gun and mortar fire. Hidden snipers would pick off Marines with ease. When we finally received the artillery we’d called in 20-minutes before, the battled quickly shifted in our favor. When the artillery barrage was lifted, we carefully began mopping up. My squad was ordered to move through some bombed out houses along a narrow side street and root out any enemy still alive. Bobby Joe and I entered one house where two enemy were hiding, one badly wounded. We opened fire the same time they did. They missed, we didn’t. But what I saw next as we continued moving down the road has haunted me all my life.