Laying in the doorway of one of the ruined houses was the dead body of a three or four year old Korean girl. I looked down at her motionless body and her dirty, lifeless face frozen in child’s innocence. I broke down in tears. We passed up the house without searching it.

After securing Seoul, our Division moved back to Inchon where we boarded ships that took us around to the east side of the Korean Peninsula. We didn’t realize it then but we were about to enter the fiercest, bloodiest battle of the Korean War.

It was a very cold day in late October when we came ashore at Wonsan, North Korea. The next day we began our climb toward the Taebaek Mountains and the Chosin Reservoir. We’d heard we were heading for the Yalu River separating China from North Korea and that Gen. Douglas McArthur may later have us push into China. That whole idea sounded crazy to me. Why, I thought, would we mount a major battle in the roughest terrain in North Korea in the beginning of winter?

On our march to the Chosin Reservoir we had a number of firefights with small bands of North Koreans and a few with Chinese troops. We were told the Chinese were only volunteers. What none of us know at the time, including McArthur and his staff, was that the Chinese had secretly crossed the border into North Korea with 400,000 regular army troops.

Something else we didn’t know at the time was the man in charge of the whole operation had made many tactical and strategic blunders. Army Maj. Gen. Edward Almond, commander of our combined force of Army, Marine, South Korean and British Commando units had spread his troop too thin along a huge 400-mile front. This resulted in major units unable to support each other during combat.

After a week’s march into the mountains, our division reached the Chosin Reservoir near Changjin Lake. A Y-shaped defense facing north was established around the reservoir. After a little shuffling around, eventually the U.S. Army was on the eastern flank while our regiment occupied the high ground on the western flank near Yudami-ni . To our south was the 7th Marine Regiment. Fourteen miles further to our south at the base of the Y-shaped defense was the 1st Marine Division headquarters at Hagaru-ri, defended by the 3rd Battalion, 1st Marine Regiment. Gen. Smith ordered a small airfield built so he could fly out casualties and bring in badly needed supplies. Predictably, Gen. Almond thought it was a waste of time and effort. It was another of his strategic blunders.

After several days in position awaiting further orders from Gen. Almond, a cold front from Siberia swept over the Chosin Reservoir, plunging the temperature to as low as −35 °F. I’d never been as cold in my life and thankfully, never have been again. Turns out it was the harshest winter in Korea in over a 100 years. 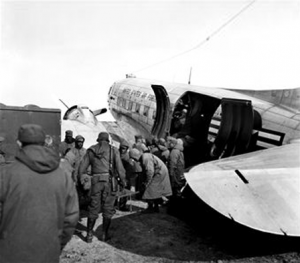 For several days the only enemy our patrols found were less than squad size. That changed on the night of November 27. Right after dark from across the Valley to our north came repeated calls of “Marines you die” in broken English. We knew that meant we were in for a world of hurt but we didn’t know when it was coming. Sometime after midnight, it came. Dozens of bugles, horns and whistles shattered the quiet. We immediately fired illumination flares and couldn’t believe our eyes: thousands of screaming Chinese were coming at us in wave after wave from the valley floor. We fired everything we had at them as they grew closer and when they began mixing in with us, we fought them in hand-to-hand combat using our bayonets, K-Bar knives, rifle butts, even fists. Some of our men died while in their sleeping bags. We eventually beat them off, forcing them to retreating back into the dark night.

At first light we got our first look at all the thousands of dead and wounded Chinese strewn around the battlefield. A great number of Marines also lay dead on the frozen ground. In this first attack of many to follow, the Chinese established a wedge between the 5th & 7th. Each Marine regiment was now surrounded, isolated by a Chinese force outnumbering us 8 to one.

Nearly every night the same thing happened, starting with “Marines you die,” followed by hordes of Chinese blowing bugles, whistles and horns while attacking up our hill and into our positions where again, it was hand-to-hand combat before the enemy retreated. This constant battle took its toll. We were all hungry, tired, worn out and very, very cold. But in spite of feeling like zombies, we still managed to hold off the enemy assaults night-after-night. During one battle, my best friend, Bobby Joe Wilder, was badly wounded. Bill Heinz, another friend, was so badly frostbitten he had to have both legs amputated at the hip.

The Army’s Regimental Combat Team-31 (RCT-31) on the east fell after a few days. Hundreds of soldier died or were wounded when their positions were overrun. Hundreds more went missing. The scattered survivors withdrew toward 1st Marine Division headquarter at Hagaru-ri. Along the way many more died in Chinese ambushes.

In the last week of November, all Marine units on the west flank were told to abandon its position and withdraw to Hagaru-ri to regroup with other Marine and Army elements in preparation for a total breakout from the deathtrap the Chinese had so skillfully set up.

We placed our dead and wounded in trucks, on fenders and hoods and carried them out with us. As best we could, we made sure no one was left behind. Sadly, many of our comrades went missing.

We fought a relentless enemy determined to wipe us out every inch of the 14 miles to Hagaru-ri. When we finally reached the 1st Marine Division headquarters in the early morning on December 4, we somehow managed to get into some semblance of a formation and limped in singing the Marine Hymn. Many of the badly wounded, many on deaths doorsteps, were flown out from our airfield, the one Gen. Almond had pitched such a fit over. While we were at Hagaru-ri, the Chinese attacked from all directions every night. And every night, they were driven back. 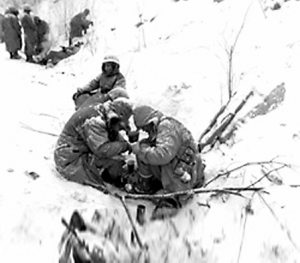 After a short rest, our breakout began on 6 December with the 7th Marines on point and our regiment covering the rear of the retreating column. At Koto-ri we married up with a battalion from the 1st Marine Regiment and continued our slow march down the narrow winding road through the mountains. It was hard to keep moving. We were overly exhausted and extremely cold and the road was in bad shape. At times it turned into nothing more than a dirt path with steep hills and drop offs on both sides. But the biggest problem was the Chinese. They were relentless in trying to destroy. From the peaks, North Koreans and Chinese in bunkers on both sides fired down on us. Enemy ground troops attacked us whenever the road would narrow, bringing the withdrawal to a slow crawl and creating chaos in our ranks. We were again fighting desperately for our lives but this time in the open with no place to go.
When we reached Funchilin Pass, we found the enemy had blown up a vital bridge. Our path to freedom was blocked. The enemy mercilessly attacked us where we stood. I figured this was the end. Fortunately our situation improved when Marine Air dropped bombs and napalm on the enemy positions. As I watched the aircraft come in sortie after sortie, I couldn’t help think that without the Marine Air, a lot more of us would never have survived.

That night we fought off numerous enemy attacks and the next morning, watched C-119 (flying boxcars) drop portable bridge sections by parachute. Army and Marine engineers reassembled the bridge sections while we climbed the hills to keep the enemy at bay. My squad was on point. That afternoon we moved across the bridge.

We finally reached the Hungnam perimeter at 11pm, December 11, 1950. The next few days we loaded onto transport ships. We also evacuated 91, 000 North Korean civilian refugees, crowding them on the decks of the same ships carrying us out. I heard somewhere that hundreds of thousands of South Korean citizens are direct descendants of those refugees we saved.

From the deck of the ship I was on, I watched as tons of explosive blew Hungnam to smithereens, leaving the enemy nothing but a destroyed city and harbor.
Chosin Reservoir was a costly battle for both the UN forces and the Chinese. We lost 1,029 killed, 4,582 wounded, 4,894 missing and 7,338 non-battle casualties, mostly frostbite injuries. It is estimated the Chinese suffered 60,000 casualties.

I fought in a few more battles but never anything as big as Pusan, Seoul or the Chosin Reservoir. After seven months in country, myself and most of the Marines I was with were replaced by Marines fresh from the United States. I left Korea a much different man than when I had arrived.