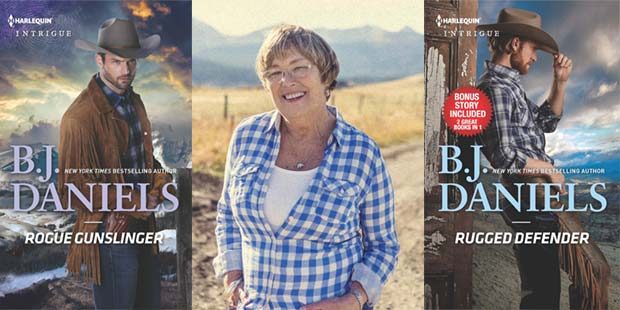 “Rogue Gunslinger” and “Rugged Defender,” the second and third books of the Clementine Sisters series by B. J. Daniels blends a great plot, setting and characters. People cannot imagine how this author can improve, but each book in this series just keeps getting better.

In “Rogue Gunslinger,” T.J. Clementine is a mystery author that is being stalked. Receiving mail from one particular fan escalates into threats because she is not following their writing advice. Hoping to escape from possible danger, she travels to her childhood home to be with her other two sisters in Whitehorse, Montana. Coincidentally she again meets in Montana, the man, Silas Walker, who either saved her or pushed her into an oncoming truck while in New York City. Deciding to investigate Silas, she realizes he protected her, and that as a former policeman he can actually help her find the culprit. This loner and mountain man becomes not only her savior, but they form a bond while trying to keep each other safe.

“There is some of us in our characters, even if we do not like to believe it,” Daniels said. “In ‘Rogue Gunslinger,’ I got into what it is like to be a writer, including all the demands. I have often told my agent I just want to write books but was told that is not possible. TJ and myself are not fond of social media. I have said, ‘The day I quit it will be because of social media.’ If someone reads a book and likes it that is when readers go looking for the author. In high school, I was a daydreamer as she is. Sometimes the story feels real to life for me. For example, I moved things around in a town to represent how I saw it. When I visit there, some things seem out of place. TJ and I had writing choose us with our characters taking on a life of their own.”

The next book of the series, “Rugged Defender,” focuses on the third sister, Chloe. She lost her job as an investigative reporter. Now in Montana for the holidays she decides that sitting around is not for her. Realizing that a high school classmate, Justin Calhoun, left in disgrace with many unanswered questions about his brother’s death, she searches out the truth. Chloe and Justin decide to team up to find out what really happened to his brother, having their lives threatened in the process.

“I love writing about Montana,” the author said. “I live in the prairie and just as with the town of Whitehorse you can see the Little Rockies in the distance. I weave in the real life of the small town. We don’t even have stoplights and the nearest Target is three hours away. People love to dance and often go to bars to do it. It is also true that guys wear jeans almost any place including weddings, funerals, and churches. I once wrote ‘a guy wearing a suit is either an undertaker or a lawyer.’ I describe in the books as I see Montana with ‘the wild prairie, the endless sky, the wide-open places… The peace and quiet. Not one siren to be heard. No traffic. No honking taxis. No loud music from the apartment next door.’”

As a recap, the first book in the story, “Hard Rustler,” begins with a city gal, Annabelle (Annie) Clementine, traveling back to her hometown of Whitehorse, Montana. After high school, she decided to escape the monotony to become a famous model, leaving her love interest, Dawson, behind. Now, 13 years later, she is back to sell her late grandmother’s house and to get out of town as soon as possible. Confronted by someone who wants to find something in that house she realizes her life is in danger. Annie and Dawson must sort out the mystery and determine what her grandmother was hiding.

“I understand how Annabelle wants to do something with her life, a desire to succeed,” Daniels said. “This happens a lot with Montana children who leave to get a job but often come home to raise their children. In this story, she comes home with her tail between her legs. I think at the beginning of the story she is a snob, arrogant, and determined. Later those qualities come out as spunky, strong, and a risk-taker.”

These books are about estranged sisters coming to terms with the past and making amends. It’s a love story and a mystery, with a lot of suspense. Each sister in her own way is a strong, independent woman who knows herself and ends up knowing what she wants out of life.