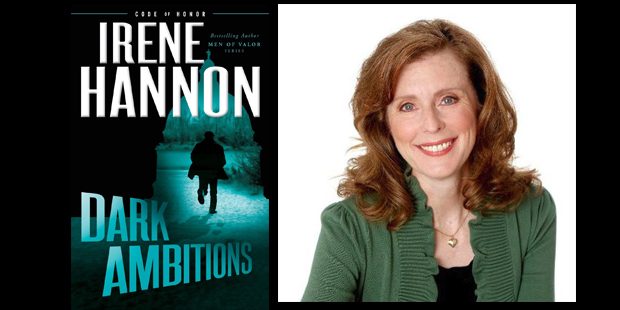 Dark Ambitions by Irene Hannon has action, mystery, suspense, and some romance.  Politics, money, and greed come together to show how power can corrupt. This finale in the series brings back a secondary character from the previous books and introduces a new one.

Hannon explains the series name and motto for each book. “I called it the ‘Code of Honor’ series because it fits the series books, storylines, and characters. In each book, the main characters had come from a dysfunctional background. All of those three became friends and are called the Treehouse Gang. As they bonded together, they formed their own little family.  When they were young, they all agreed to do something to make the world a better place as they grew older.  Rick fulfilled that vow by serving in the military and helping young children in foster care to get a better start in life. The ‘Justice First’ motto comes from the private investigation firm that has two former detectives, a Secret Service Agent, and a DEA agent.  This four-person firm has a desire to make sure justice is served.  They do not take on clients that are underhanded.  The jobs they do take are above board and they make sure the clients are not trying to serve their own purpose.”

The book begins with former army captain Rick Jordan finding at his camp for foster children, in rural Missouri, some blood in the snow.  Investigating further he recognizes a good luck charm of his army buddy Jackson “Boomer” Dunn. Believing Dunn is in trouble he hires the private investigation firm Phoenix Inc. to help find his buddy. Assigned to the case is former police detective, Heather Shields, the latest partner of the firm. After finding Boomer dead and those who knew him dying under suspicious circumstances Shields believes the investigation has turned from finding a missing person to finding who murdered Dunn. With the violence increasing Shields and Jordan must find the killer before they themselves are harmed.

“I wrote Rick as an ex-Army Night Stalker who learned to fly helicopters while in the military.  He is smart, brave, and puts others welfare above his own.  Now in his mid-thirties he runs a camp for foster children.  Rick has a strong sense of giving back. He is conscientious, gracious, courteous, and modest. Heather is also very diligent. She left police work after a traumatic experience.  She is committed, persistent, intelligent, brave, caring, and courageous.”

Known for writing great romantic suspense novels Hannon does not disappoint in this novel. What drives this character driven story is the connection and chemistry between the hero and heroine. As the pages are turned so is the tension that ratchets up.