‘Death Is Not Enough’ 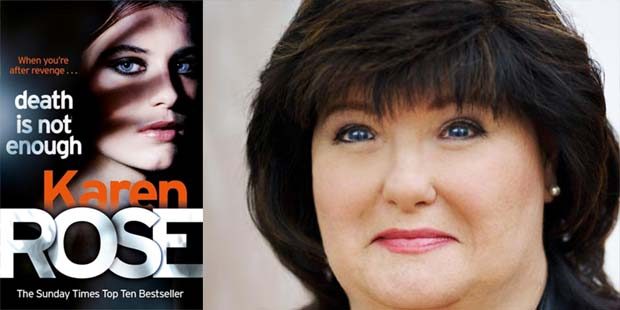 With “Death Is Not Enough” Karen Rose has outdone herself. This story highlights love and friendship, romance and passion, gruesome murder, frustrating injustice, with an engaging hero/heroine.

Although Rose’s readers have seen Thomas Thorne and Gwyn Weaver in previous books, this novel is their story. Thorne actually gives defense attorneys a good name, always attempting to help those unfairly charged, as was the case when he was young. His backstory is very compelling, having been falsely accused while in high school.

It seems Déjà vu when he once again becomes the main person of interest in a murder. He is found in bed, drugged senseless, next to a woman beaten and knifed to death, with his fingerprints on the weapon. His friends circle the wagon, standing by him and searching for details that will prove his innocence. It becomes apparent that someone is setting him up, out for revenge, and wants to slowly destroy his life, piece by piece. The various attacks on his friends, his business and his reputation are intended to get at everything he holds dear and values.

The theme of the book is justice for all.

“I wrote how Thorne was upset when he saw due process circumvented and abused,” Rose said. “This country is built upon being punished for what you actually do. Defense attorneys are part of the check and balance systems. Justice is done in my books. It can be a good thing, but if used improperly it can be turned into a weapon. Thorne takes this very seriously making sure that the Constitution is enforced, and that the prosecutors do not get away with bullying the system.”

All the women characters could sing the Helen Reddy song, “I am woman hear me roar.”

“I am used to strong women because my circle of friends is intelligent and strong women,” Rose said. “They have spines of steel and will not let anyone push them around. Lucy, Stevie, Paige and Gwyn all rallied around Thorne because they created a family around the circle of friends. They took control over their own destiny and never cowered. Women need to stand up for themselves and to take matters in their own hands. My men characters see women as equals and not as delicate flowers. I hope my characters are role models. Strong women should be thought of as cool and not the ‘b’ word.”

Readers will not be disappointed with this suspenseful story. They will be riveted hoping beyond hope that justice will prevail and that the psychopath attempting to frame Thorne will get his due. Although the romance was not at the forefront, it added to the storyline.