Defensive free agents on the market 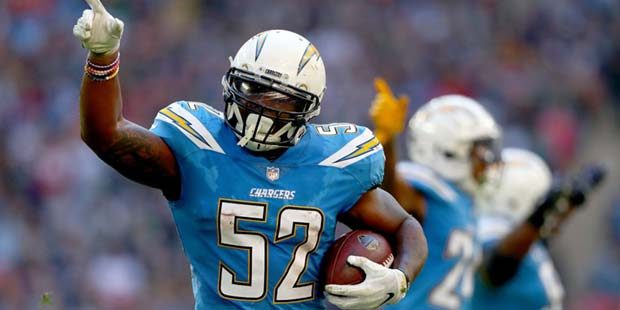 Entering the 2018 offseason, Rams General Manager Les Snead made the decision to go “all-in” for the upcoming season and acquired veteran players whom he signed to big money contracts. Already loaded with talent, Snead traded for the likes of Brandon Cooks and cornerbacks Aqib Talib and Marcus Peters. He also landed the top unrestricted free agent on the market in Ndamukong Suh — all in the effort to get the Rams to the next level.

Snead’s gamble paid off as the Rams won the NFC Championship and played in the Super Bowl in just its second year after returning to Los Angeles.

What many Chargers fans are wondering is if General Manager Tom Telesco will follow suit and also go “all-in” this offseason in hopes his highly talented squad can get to the Super Bowl while quarterback Philip Rivers has some gas left in his tank.

As the free agency period quickly approaches, Telesco has some major decisions to make on which in-house players he will re-sign and which free agents, if any, he will bring into the fold to help get his team to the big game in 2019. The Chargers have a total of 13 unrestricted free agents including three starters on defense — defensive tackle Brandon Mebane and linebackers Denzel Perryman and Kyle Emanuel.

Injuries at the linebacker position exposed the defense throughout the latter half of the season and an upgrade is needed via the draft, free agency or both. In their first mock draft, both Daniel Jeremiah (NFL Network) and Seth Trachtman (Yardbarker) have the Chargers selecting a linebacker with the 28th pick.

Jeremiah — Mack Wilson, LB, Alabama. “The Chargers need to get better at the linebacker position and Wilson is a true three-down player,” Jeremiah said. “There is little mystery why the Chargers would be interested in adding a player of Wilson’s caliber at the linebacker position. Kyzir White, Jatavis Brown, and Denzel Perryman all suffered season-ending injuries in 2018. Wilson isn’t just an obvious need-based pick given his position. At 6-2, 234 lbs, he has the size you’re looking for in addition to being one of the better playmaking defenders in the draft. He is capable against the run and is an asset in coverage as well.

“Tom Telesco could not do much better with the 28th overall pick in the draft than to come away with Mack Wilson.”

Trachtman — Devin Bush, LB, Michigan. Said Trachtman, “Linebacker could be an area of need for the Chargers with Denzel Perryman a pending free agent. Bush has the ability and versatility to address the need. He had 10 sacks and 161 tackles over the past two seasons for the Wolverines.”

Pro Football Focus (PFF) recently released its top 50 players who are set to become free agents on March 13. With many of the higher ranked players likely to be franchise tagged, re-signed or frankly just too expensive, here is a look at players ranked lower on PFF’s list who might be willing to sign a cap-friendly contract to play for a Super Bowl contender. Comments and cap numbers provided by PFF’s Mike Renner and Spotrac, respectfully.

Renner: “Mathieu had to take a prove it deal after the injuries piled up and he was cut in Arizona. Mathieu proved he’s still more than capable of making plays around the line of scrimmage. While he looked uncomfortable as a deep safety at times, he earned the fourth-best run-defense grade of any safety and notched the seventh-most stops. Not even 27 yet, Mathieu looks over his injuries woes.”

Renner: “Mosley has been the definition of solid throughout his career. He’s played 5,160 snaps including the playoffs in his career and only his 2015 season had a grade below 70.0. He’s also been incredibly sound as a tackler, with single-digit misses each of the last two seasons.”

Renner: “Once a promising rookie, Anderson never quite regained form after an ACL tear, and he was dealt for a late rounder to the Jets last offseason. However, he quietly put together his best season as a pro in 2018, and his 48 pressures were the 12th- most of any interior player in the league last season.”

Renner: “Wright has been trending downwards ever since he earned an 88.3 overall grade back in 2015. The Seahawks linebacker hasn’t graded above 70.0 in coverage since, and he will be 30 next season. He’s still one of the best tackling linebackers in the NFL and has only one season with double-digit misses in his career (2014).”

Renner: “Wilkerson looked much improved with a 76.5 overall grade the first three weeks of the season in Green Bay before breaking his leg against Washington. He fell off a cliff in New York after signing a big contract and had back-to-back overall grades below 70.0. For a man who’s not even 30, it’s difficult to think he can’t get back to quality play.”

The Endzone: With Rivers entering the final year of a contract that will pay him $23 million, his next contact will ensure he retires a Charger. “I can tell you he’s not going anywhere, so he’s going to be here,” Telesco said, per ESPN.com’s Eric D. Williams. “We’ll talk at the right point, as far as the moves we need to make in the offseason, the resources we have and how it all fits in. But yeah, he’s not going anywhere.”

Throwing for 4,308 yards, 32 touchdowns and 12 interceptions en route to leading the Chargers to the playoffs for the first time since 2013, Rivers proved he still ranks amongst the top quarterbacks in the NFL. With Tom Brady winning another Super Bowl at 41 and a 50-year-old Drew Brees signing a two-year, $50 million contract extension, look for Rivers to sign a cap-friendly, multi-year contract to allow Telesco the flexility to bring in the players needed to get the Chargers to the Super Bowl.

With the new stadium at Hollywood Park set to open for the 2020 season, it is imperative the Chargers advance to, at least, the AFC Championship game next season. It’s highly unlikely Telesco will spend the kind of money Snead spent on players last year, however, whatever amount he does spend must result in a deep playoff run if the franchise has any hope of establishing a fan base in Los Angeles.