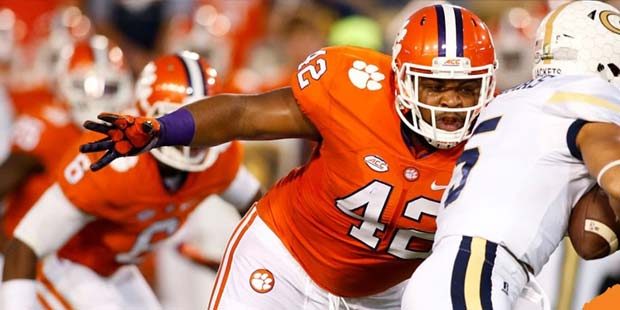 With the 2018 NFL season over for the Los Angeles Chargers it is now time to look ahead at the NFL Draft. Although the season was no doubt a success — advancing to the Divisional Round of the playoffs — the 41-29 playoff loss to the Patriots exposed the glaring need to upgrade both sides of the line of scrimmage.

Leading up to the draft we will profile a number of the top college prospects NFL analysts believe the Chargers should target as well as the various mock drafts the prognosticators publish each year.

After giving up some 498 total yards to the Patriots in their playoff loss, we will focus on the defensive tackle position where veterans Corey Liuget and Branden Mebane could be fighting to keep a roster spot. Liuget missed the first four games of the season serving a suspension for a PED violation and suffered a season-ending knee injury during the team’s week 11 loss to the Broncos. The Chargers could save $8 million cutting him this offseason.

As for Mebane, he is no longer under contract and the 13-year veteran could very well become a casualty of a youth movement along the defensive line.

Here is a look at the players as well their rankings according Kiper, McShay and OURLADS Draft Guide.

Christian Wilkins, DT, Clemson, 6-foot-4-inches, 310 pounds. Ranked No. 5 and No. 2 at defensive tackle by Kiper and OURLADS, respectively, Kiper has the Chargers selecting Wilkins at No. 28 in his first mock draft. McShay has Wilkins ranked No. 13 overall.

Kiper: “Did you see the Patriots punish the Chargers up front in the AFC divisional round? They were pushed around. The 6-foot-4, 310-pound Wilkins would be an improvement. He could plug the nose for L.A. and also bump outside to end. He was a four-year starter for the Tigers and always showed up on tape; he had 15 tackles for loss in 2018. Derwin James was one of the stars of the Class of 2018, and the Chargers have a solid roster. Let’s get them past the divisional round.” Kiper ranks Wilkins No. 21 overall.

Palazzolo: “The Chargers have made great strides on the defensive side of the ball in recent years but they still have issues on the defensive interior. Tillery posted the top pass-rushing grade of any interior defensive lineman last season at 92.5 and he has a long 6-foot-7 frame to help out in the run game.”

McShay: “The Chargers definitely want some support in run defense, and this big, versatile lineman can press against the run and occasionally flash as a pass-rusher Quarterbacks aren’t going to love coming out of the huddle and seeing Joey Bosa, Melvin Ingram and Tillery staring them in the face.

“Tillery uses great upper-body strength to press in the run game and flashes upside as an interior pass-rusher. He does play a little high and doesn’t have great closing burst, but that didn’t stop him from dialing up eight sacks, three forced fumbles and 10.5 TFL in 12 games for the Irish this season.” McShay ranks Tillery No. 16 overall.

Both Kiper and OURLADS have Tillery ranked No. 7 at defensive tackle.

Jeffery Simmons, DT, Mississippi St., 6-foot-4-inches, 300 pounds. Wilson and Ledyard believe Simmons will be the choice for the Chargers.

Wilson: “We’ve spent months talking up Quinnen Williams and Ed Oliver, but Simmons has been a disruptive interior force this season. He has just one sack but he spends games in the backfield, as evidenced by his 15.5 tackles for loss. He often requires double-teams, which is a problem for any offense already dealing with Joey Bosa and Melvin Ingram.”

Ledyard; “I’ll give the Chargers a dominant interior defensive lineman with pass rush skills every year until they take one. Simmons with Joey Bosa and Melvin Ingram could wreck the league, as the Mississippi State defensive tackle has the burst, hand usage and improved technique to be a monster at the 3-technique spot.”

McShay: “Simmons plays with a natural leverage at the line. He has above-average awareness, good range and more strength than his frame would suggest, but he certainly can improve his hand usage. The junior had 14.5 TFL this season. He fits best in a one-gap-heavy scheme and plays a lot of snaps. There is some character history here, though, that teams will take into account.” McShay ranks Simmons No. 17 overall.

Kiper has Simmons going to the Browns with the 17th pick and ranks him No. 13 overall and the No. 3 defensive tackle. OURLADS ranks Simmons No. 14 overall and No. 4 at DT.

Sikkema: “It’s being proven before our very eyes that the Chargers have one of the most complete roster in all of football, but that doesn’t mean it can’t add more, even on a stout defensive line. Willis had one heck of a season in Miami, and throwing him in the mix with Ingram and Bosa on the edges will give them a complete pass rushing force.”

Crabbs; “Joey Bosa and Melvin Ingram are stud pass rushers. Now add in some interior pass rush. That’s what Willis can bring to the table. The Chargers have several young talents on defense: Des King, Derwin James, Bosa and Ingram, for starters. The team’s ability to soften the blow of Philip Rivers’ retirement will be centered around two things: having an identity outside of him as a team and finding a suitable replacement.

“This pick accomplishes the former.”

Kiper and OURLADS rank Willis III No. 8 and No. 6 at DT, respectively.

“Beefing up the interior is a priority for the Bolts, with age and free agency creeping up on their starters at the position. Jones has the size and athleticism to create chaos in the middle.”

Kiper and OURLADS rank Jones No. 6 and No. 5 at DT, respectively. Kiper has the L.A. Rams taking Jones with the 30th pick in his first mock draft.

The Endzone: With the free agency period set to open March 3, NFL.com’s Greg Rosenthal has three defensive tackles listed amongst his top 25 NFL Free Agent List. Here is a look at Rosenthal’s comments including the player’s 2018 salary per Spotrac.

No. 4: Grady Jarrett — Atlanta Falcons ($1,907,000). Rosenthal: “A 25-year-old game-wrecker from the interior who has improved every year. There’s little chance the Falcons will let Jarrett get away.”

No. 12: Sheldon Richardson — Minnesota Vikings ($8,000,000). Rosenthal: “Richardson started out his season like a man on fire before settling into another campaign that made his employers probably want just a little bit more. He’s been stuck on the “prove-it contract” cycle for years”