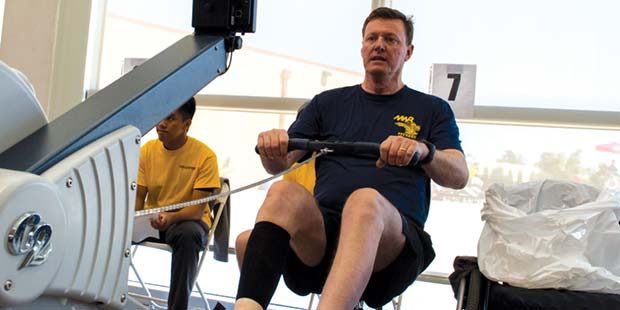 PENSACOLA, Fla. — A little battered and bruised but no worse for wear, Rear Adm. Kyle Cozad, commander of Naval Education and Training Command, returned from Coronado after competing in the 2019 Team Navy Trials, March 15–21.

Cozad, along with 54 other wounded warriors, tested their grit in 13 events including rowing, cycling, wheelchair basketball, golf, swimming, wheelchair rugby, wheelchair tennis, sitting volleyball, powerlifting, shooting, archery and track and field. Only a select few will represent the Navy in the 2019 Department of Defense Warrior Games to be held in Tampa, Florida, June 21–30.

“I quickly discovered that I was the ‘silverback’ in the group in terms of age and rank,” Cozad said. “I can assure you that folks took me seriously on day one when I commented that rank was irrelevant. The young guys and gals took it to me on the court, cycling course, rowing venue, basically wherever they could. Trust me, there was no mercy for the old man!”

The trials are part of the Navy Wounded Warrior – Safe Harbor program, which is the Navy’s sole organization for coordinating the non-medical care of seriously wounded, ill and injured sailors and Coast Guardsmen, and providing resources and support to their families. Navy Wounded Warrior has assisted more than 6,600 service members throughout the country.

Although the trials allowed Cozad to experience sports he had never tried since he was injured in spring 2018, causing him to adapt to wheelchair mobility, it was the time spent with fellow wounded warriors that had the greatest impact.

“The week provided me an opportunity to spend time with each of the wounded warriors and their caregivers, which gave me a perspective that exceeds words,” said Cozad, who underwent emergency back surgery and is working through physical therapy to stand and walk again. “I can cite example after example of how this program, and more specially, adaptive sports have literally changed lives, and for that understanding, I walked away with much more than I ever imagined before I arrived.”

“As a guy who’d been in for 33 years, and wasn’t quite sure why my local Navy Wounded Warrior – Safe Harbor team wanted to visit me after I was released from the hospital, we (Navy leadership) need to better understand the what, why and how Navy Wounded Warrior supports our wounded, seriously ill and injured,” Cozad said.

“The program only works when prospective wounded warriors know about it, and when parent commands support it,” Cozad said. “Although these stories are the exception, I have heard about commands who don’t understand the program aims and on the extreme fringes, about commands who simply don’t support their warriors.”

From Cozad’s small group interactions with other wounded warriors and the mentoring he does with about a dozen recently injured or recovering sailors, he said he left the Team Navy Trials with an important realization.

“There is nothing more important than an opportunity to supplement the great work our region Navy Safe Harbor caseworkers provide by talking to other wounded warriors about their experiences,” said Cozad. “No one knows what it’s like better than someone who’s been there, done that.”

Although the oldest and most senior wounded warrior at the trials, Cozad hopes to represent the Navy at the 2019 DOD Warrior Games.