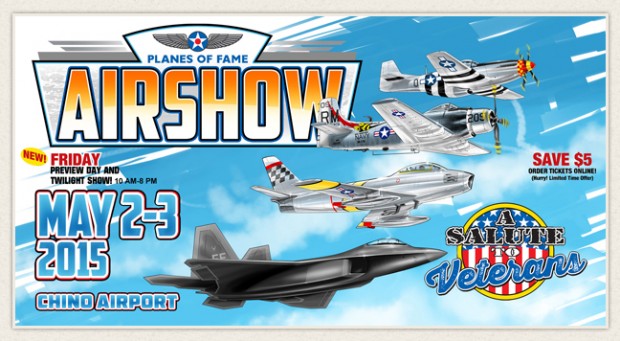 Planes of Fame Air Museum is proud to present Air Show 2015, May 2 & 3: “A Salute to Veterans”. This year’s airshow will feature nearly 50 historic aircraft, performing for your enjoyment as well as a salute to our veterans. We invite you to Airshow 2015 to celebrate the history, contributions, and sacrifices of our veterans.

Performers include U.S.A.F. F-22 Raptor Demo Team and Heritage Flight, Sean D. Tucker-Team Oracle Aerobatics, Canadian Forces CF-18 Hornet Demonstration Team, Sea Fury Aerobatics by Sanders Aeronautics, Clay Lacy’s Learjet Demonstration, Rob Harrison and the Tumbling Bear, Gregory Colyer’s T-33, John Collver’s AT-6 Aerobatics, and over 40 WWII aircraft including B-25, P-47, and P-51s. In addition to many other fantastic airplanes that will be performing and on static display, there will be a special panel discussion with a large number of our honored veterans. A special educational display by the Remembrance Rescue Project will present Rescue 5, a restored FDNY truck, damaged during September 11th, 2001, that lost all its crew of 11 firefighters. Stay tuned for future announcements of some of our special guests. Also, be sure to catch the Preview Day & Twilight Show on May 1! View our Air Show promotional videos of performer highlights for 2015! If you are interested in helping to sponsor Air Show 2015, click here to learn about the opportunities!