A few weeks ago, I was photographing the U.S. Marines VMFAT-101 “The Sharp-shooters” squadron at a civilian airport outside of San Diego, when I noticed an all white F/A-18 with no markings on the plane.

VMFAT-101 is a Fighter training squadron, based out of MCAS Miramar, and during their lunch break, I asked several of the pilots about the odd paint scheme of the plane in question. All they knew was that the plane was a very early model of the F/A-18, and it was transferred from NASA to the Marine Corps. 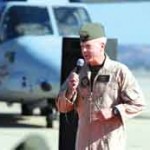 Today, at MCAS Miramar, this plane has a new paint job, and a new honor, as it has been memorialized for 4 different Congressional Medal of Honor recipients, two U.S. Marines and two U.S. Sailors. This plane not only has a new paint job, but these four men’s names are listed where the pilot and co-pilots names would be placed, and the citation of their heroic efforts is listed on the outside of the intakes of the aircraft. 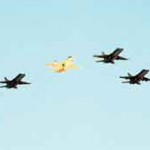 The plane was introduced to the invited guest and media as it flew over in a missing man formation with 3 other F/A-18s from the Sharp-shooters. The major highlight of the dedication ceremony was the fact that the co-pilot of this plane was the 35th and current Commandant of the United States Marine Corps, General James Amos. His pilot was Lt. Colonel R.B. Brodie, the Commanding Officer of Sharp-shooters.

General Amos has piloted F-4 Phantom II’s and F/A-18 Hornets during his Marine Corps career, and in typical Marine Corps fashion, he opened his speech with” Well you saw me flying up there, and I’m not sure how it looked from down here, but it looked shit hot from up there” and he received a large OOH RAH from his Marines and applause from the civilian audience.

After the General spoke of about each man who was being honored today, he then met with the family of Michael Monsoor who were in attendance, and personally showed them the plane and Monsoor’s citation.

The plane will remain with VMFAT-101 and be used in training and will keep its new paint job for the future of its remaining life.