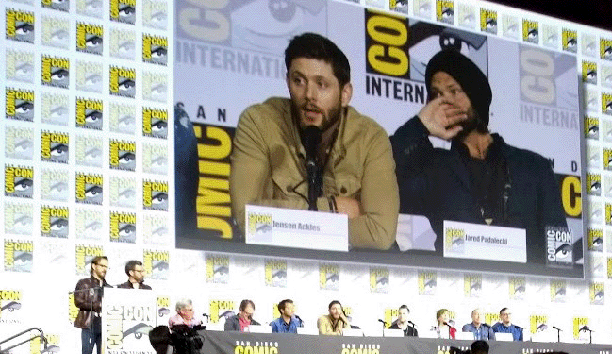 We all made it, every one of us! The final day of San Diego Comic Con International 2019 is in the bag. Now all that’s left to do gather all the swag, goodies, Funkos and characters and find a place for it all in our homes. I mean that in good fun because I really love all the Comic Con goodies because they continue to be a reminder of just how much fun there is to have.

The morning started off with the Supernatural final appearance in Hall H. A friend of mine reminded me of how this show started in 6BCD and grew into Ballroom 20 and grew so big that it had to be moved into Hall H. Every Sunday morning the fans would gather to celebrate the Winchester brothers and attendees never knew what was going to happen. I do have to admit that my favorite year was when the band Kansas came to perform Carry On Wayward Son which is the theme song of the show.

This year was bittersweet as every person in line, and it stretched from Hall H around the back to the embarcadero, wanted a chance to say goodbye to the cast they have come to enjoy. The show will be ending it’s fifteen season run later this year which means you have enough time to binge watch fourteen seasons before it all wraps up.

Entering into Hall H, each attendee was given a small replica of the Winchester Bros. car ‘Baby’ and I have to say it’s pretty cool. The panel this year included Jensen Ackles, Jared Padalecki, Misha Collins, Alexander Calvert and executive producers Robert Singer, Andrew Dabb, Eugenie Ross-Leming, Brad Buckner and Robert Berens. Each took terms talking about the past season, making jokes and only giving hints on the final season.

When asked about their feelings regarding the final season and the fans, Ackles and Padalecki both broke into tears and leaned on each other. They followed with an emotional thank you to the fans that have made the series such a success. All the of sadness would soon be put away as the announcement was made that any of the fans who asked questions were now in the running of a car – a replica of Baby. When I say replica, I mean a real car! The lady who won it is now going to have a million new friends.

Thunderous applause broke out as the panel hugged it out and made their way off the stage.

The CW series Riverdale took the stage next and began when the show’s creator Roberto Aguirre-Sacasa arrived to talk about the passing of Luke Perry. “I remember when Luke auditioned, I was so shocked that Luke Perry was auditioning. He came up to me and said ‘I read the script and I love the character Fred because he’s just like me. I have a son and this character speaks to me.’” Playing a video tribute was very touching.

Aguirre-Sacasa also shared that Shannon Doherty will make an appearance in the show. It was something Perry had asked for and now the show is fulfilling that request.

Coming to the stage was the cast including Madelaine Petsch, Camilla Mendes, KJ Apa, Lili Reinhard and Cole Sprouse. It must be said that Sprouse has been my favorite because he seems like such a jovial handful. In regards to the series, the theme is wondering if Archie and the gang can possibly have a simple life both in school and at home. It’s unlikely to my way of thinking and the show would be short lived if they did but the next season promises to be intense. The show returns in October on the CW.

The panel discusses their roles and how intense the show is with its portrayal of the Mayans motorcycle club and their dealings with the cartels. A fan asked if they were worried about stereotyping and it was Olmos who said that in all stereotypes there are rings of truth to some of it. He also says that season two, airing in over a month, promises to get even darker than the first season.

If you haven’t seen the new series Mayans MC yet, might I suggest you do so. There are people you will remember from SOA and a storyline that is a tad familiar but taken to places you wouldn’t expect.

What I can tell you about this cast is that they have the same spirit as the cast from Sons of Anarchy. They are very funny, seem to know each other very well and joke in a way that tells me this is a strong group of actors. That is important when you have an ensemble series, to feel as if they true are a family in their sense of the word. This is a storyline that is violent, telling and contains turns that put every character on notice – no one is exempt from danger!

That’s it, that’s all there is for this year. It was filled with stories, meeting with friends that although I might be friends with on Facebook or other social media platforms, I can be guaranteed we can see each other once a year. SDCC is a place to share in our likes and try to convert each other to see or experience something we don’t think we’d like. Trust when I say I’ve been taken in by shows I didn’t think would hold the slightest interest for me.

SDCC is a time to catch up, dress up, play up, and enjoy all of that with over a hundred thousand of your closest people. That is why SDCC keeps coming back and especially why we all go year after year.

With that said – it’s time to pack up for another year. I hope everyone had an amazing time and, as we say, meet you hear next year!