From Spanish mission to defender of freedom 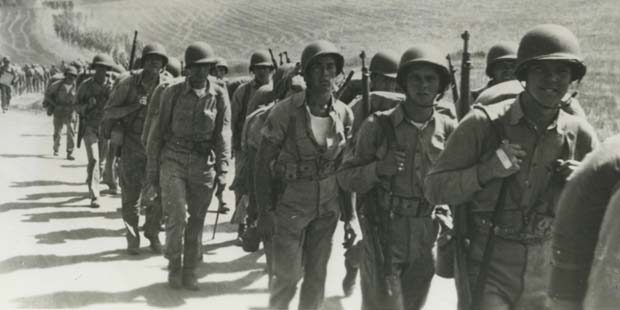 Of all the Marine Corps bases throughout the world, Camp Pendleton has one of the most intriguing pasts, filled with historical charm and vibrancy. Spanish explorers, colorful politicians, herds of thundering cattle, skillful vaqueros and tough Marines have all contributed to the history of this land.

Sept. 25 marks the 75th anniversary of the dedication of the camp by President Franklin Roosevelt as a Marine Corps installation. What started as a Spanish missionary installation is now one of the largest Marine Corps bases in the world — and a much-needed break between the urban expanse of San Diego and Orange counties.

In 1769, a Spaniard by the name of Capt. Gaspar de Portola led an expeditionary force northward from lower California, seeking to establish Franciscan missions throughout California. On July 20 of that same year, the expedition arrived at a location now known as Camp Pendleton, and as it was the holy day St. Margaret, they baptized the land in the name of Santa Margarita.

During the next 30 years, 21 missions were established, the most productive one being Mission San Luis Rey, just south of the present-day Camp Pendleton. At that time, San Luis Rey Mission had control over the Santa Margarita area.

In 1821, following Mexico’s independence from Spain, the Californios became the new ruling class of California, and many were the first generation descendants of the Portola expedition. The Mexican governor was awarding land grants and ranchos to prominent businessmen, officials and military leaders. In 1841, two brothers by the name of Pio and Andres Pico became the first private owners of Rancho Santa Margarita. More land was later added to the grant, making the name Rancho Santa Margarita y Las Flores, and that name stayed with the ranch until the Marine Corps acquired it in 1942.

In 1863, a dashing Englishman named John Forster (Pio Pico’s brother-in-law) paid off Pico’s gambling debts in return for the deed to the ranch. During his tenure as owner of the ranch, he expanded the ranch house, which was begun by the Picos in 1841, and developed the rancho into a thriving cattle industry.

Forster’s heirs, however, were forced to sell the ranch in 1882 because of a string of bad luck, which included a series of droughts and a fence law that forced Forster to construct fencing around the extensive rancho lands. It was purchased by wealthy cattleman James Flood and managed by Irishman Richard O’Neill who was eventually rewarded for his faithful service with half ownership. Under the guidance of O’Neill’s son, Jerome, the ranch began to net a profit of nearly half a million dollars annually, and the house was modernized and furnished to its present form.

In the early 1940s, both the Army and the Marine Corps were looking for land for a large training base. The Army lost interest in the project, but in April of 1942 it was announced that the rancho was about to be transformed into the largest Marine Corps base in the country. The Marine Corps paid $4.2 million for the rancho.

On the eve of World War II, the Marine training bases were limited to Quantico, Va., Parris Island, S.C., and San Diego. When expansion of all U.S. armed forces was authorized by President Roosevelt’s proclamation of an unlimited national emergency on May 27, 1941, an immediate need for additional amphibious force training facilities led to the construction of Camp Pendleton.

After five months of construction, the Rancho Santa Margarita y Las Flores, which included San Onofre, became the West Coast’s largest military camp. The first troops to occupy the new Base were the 9th Marine Regiment with the 1st Battalion, 12th Marines, who marched for three days from Camp Elliott in San Diego to Camp Pendleton. President Roosevelt dedicated the Base on Sept. 25, 1942, in honor of World War I Major General Joseph H. Pendleton who had long advocated the establishment of a West Coast training base.

By 1943, the first women Marine reservists arrived to help keep base administration running smoothly. The O’Neill’s blacksmith shop became the Ranch House Chapel and opened primarily for their use.

By October 1944, Camp Pendleton was declared a “permanent installation” and by 1946, became the home of the 1st Marine Division.

During the Korean War, $20 million helped expand and upgrade existing facilities, including the construction of Camp Horno. When Camp Pendleton trained the country’s fighting force for the Korean and Vietnam Wars, approximately 200,000 Marines passed through the Base on their way to the Far East.

The Corps broadened its capabilities during the 1980s from “amphibious” to “expeditionary” by combining infantry, armor, supply and air power. Troops and equipment could now be deployed halfway around the world in only days as part of a self-sustaining air-ground team. This successful use of military power has been demonstrated through Marine Corps operations in Grenada, Panama, the Persian Gulf, Somalia, Bosnia, Haiti Afghanistan and Iraq.

Camp Pendleton has continued to grow through renovations, replacing its original tent camps with more than 2,600 buildings and 500 miles of roads.

Efforts today continue to preserve the rich heritage of Camp Pendleton’s founders and the more than 230 years of Marine Corps history. The original ranch house is used for historical tours and has been declared a National Historic Site.

Some of the base’s streets and sites have been named in honor of military war heroes and battles. The geographic locations formally christened by Spanish explorers and missionaries continue that heritage. A ranch cattle brand, Pendleton’s logo, can be seen throughout the base.