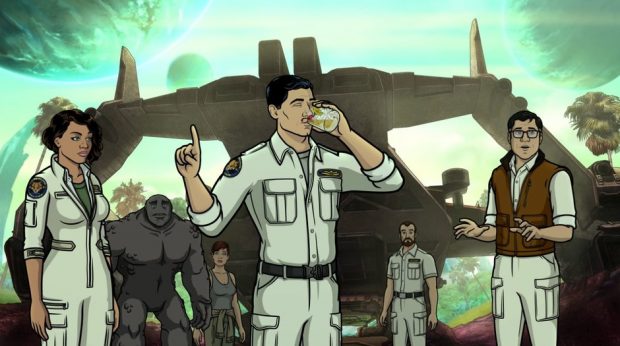 Casey: We are really excited to connect with you virtually with fun stories, witty banter and some fun hints and tidbits about season 11. I want to thank everyone for being here. It’s a little bitter sweet because we talk about how the only time we see each other is at these conventions so I’m sending you a virtual hug and kiss. I will miss the cosplay from the Archer fans. One year at Dragon-Con it was an outlaw country Cheryl.  Another great cosplay was also at Dragon-Con and the first year we went as a group and comic book artist Adam Hughes was dressed as Pam. We recorded the last two episodes of ARCHER while under quarantine, did that make it difficult and what did you think about that.

Chris: They had these safety protocols and we didn’t touch each other because I usually touch a lot of people in the studio.

Aisha: I come in after Chris and everyone was traumatized.

Chris: I have a lot of love to give.

Judy: I tried to figure out how to record form home and it was the pain for a bum and then I found out you guys went to the studio and I said ‘can I go to the studio?’

Amber: I thought it looked the same to me.

Judy: We walk in on our own anyway. I feel like it was definitely clean and spaced but it wasn’t any different. I go in the front door and straight to the studio.

Aisha: Don’t look at anyone in the eyes, yell ‘lets get this done’ and run off on your unicorn.

Judy: There is one good thing is that there is a liquor store right net door and they always had toilet paper. Last night I was introduced to dry vermouth on the rocks, now that’s a drink.

Judy: I’ve only had white vermouth because every Tuesday is my Zoom knitting group and we do a different signature drink and last night was that. You guys can talk now if you want.

Aisha: Did any body else find the supermarkets didn’t have anything but the liquor stores had everything. I mean mine had anti bacterial dial, fresh limes, N95 mask, it was insane.

Judy: I learned early on that her Bodega market and I couldn’t find garlic and sure enough they had one of those garlic socks.

Amber: My parents are preppers so he had masks, Clorox, paper towels and wipes and made my bug out bag and had all the toilet paper I needed.

Chris: I refuse to give my local store my business because I use Amazon.

Casey: Judy mentioned her knitting which you’ve been doing for quite a while. Has anyone else got interesting quarantine hobbies.

Aisha: Does drinking count as a hobby.

Judy: I am into craft cocktails. I don’t consider a light beer alcohol anymore.

Judy: Happy hour is getting earlier.

Aisha: I can not have a meeting before 11 a.m. in the morning because I’m sleeping in my bed so now I’m available between 1 and 4. Can we meet? Nah, I’m booked till 1.

Casey: Normally when doing a Comic Con panel we talk about the season that’s already happened. This time, lucky viewer, we’ve recorded everything and here in Atlanta and we are working on the last couple of episodes. What guy are you guys excited about in the real world and not a coma season?

Amber: The scripts were so funny. I loved being in space and on the island and thought it was super fun but something excited about being back in the real world and super fun to see what everyone has been up to.

Chris: It has been a challenge keeping my son occupied and just started an art class on Zoom. He’s enjoying that and then we do a neighborhood karate class and they are going to do a neighborhood hip hop class. People are outside and socially distance.

Lucky: I’m coming to your neighborhood.

Aisha: Does not showering count as a hobby. I’ve perfected it.

Amber: Telling your partner ‘hey, maybe today is a good day to take a shower!’

Judy: Can I draw you a bath?

Lucky: What was your question?

Casey: Its about a little show we do call ARCHER. So, Season 11?

Aisha: We can’t say anything, we can’t give anything away.

Casey: This happens to all of us coming into work. There was three of us in a giant conference room and the first half hour we were so happy to see other people that were talking and b.s.’ing. Maybe we can do hints and spoilers, there are going to be cool guest stars. One that I can reveal, we are very excited, Simon Pegg is going to be in the season.

Aisha: That means I can’t wait to run up to him on the street and say ‘hey Simon you were on my show!’ and he can say ‘stop touching me I don’t’ know who you are!’.

Casey: The other person I want to talk about as a reoccurring guests star came to us via Judy Greer – its’ Jamie Lee Curtis. I don’t want to say anything about her character.

Judy: Earlier Aisha was talking about the many, many feature films I am in and one of them came out two years ago from the Halloween franchise starring Jamie Lee Curtis and I was offered the role as her daughter. When we first showed up for rehearsals in Charleston, I introduced myself to her and she went right into ARCHER. I think it was maybe how I got the job because she was an executive producer on the movie. So she and her son really bond over ARCHER and its his favorite show and she loves it. I said ‘Jaimie, 100% I could get you on the show’ and she’s like ‘oh really’ and I said yes.

Aisha: I’m always surprised when reputable people like our show.

Aisha: We are a little group of weirdos.

Lucky: Speaking of weirdos, where is Jon Benjamin.

Casey: He is out in the wilderness watching birds.

Aisha: Is he camping or doing some survivalist thing?

Judy: I don’t get that from him.

Amber: I doubt it.

Lucky: Is he at a drum circle.

Casey: I have a couple of fan questions as well. Having lived with these characters more than a decade have you had an episode play out in your dreams.

Chris: I never remember my dreams.

Judy: Me either, because of passing out.

Aisha: Have you ever dreamt about a character you’ve played.

Chris: When I was in collage we were doing a story theatre, fairy tales and  we were travelling around the state in empty theatres and college gymnasiums and one of my characters is a crow and I go ‘kaaaa kaaa kaaa’ and my roommate said I was doing it in my sleep. I was in character as a crow.

Aisha: You are a method actor.

Judy: I don’t know what that is.

Casey: When things get stressful at work I always dream about when I worked at a chain restaurant 20 some odd years ago but never about ARCHER.

Aisha: This isn’t a stressful show.

Amber: Casey is always stressed out.

Judy: This is the easiest thing to ever make.

Casey: Wonderful animators and artists know this is not easy.

Aisha: To echo what Casey said the animators on the show are the best animators on television doing the most beautiful and complex show and they work very hard. We clowns come in and our sweat pants so thank you very much.

Judy: How old is the Archer baby now?

Casey: I think one is nine or ten years old.

Judy: Is that the one who was the model baby for Seamus.

Casey: I don’t recall but lets say… yes. If the Archer cast could star in a James Bond film what would it be?

Lucky: Stink Finger or The Man With the Golden Rod.

Chris: A Good Day to Sploosh.

Casey: Which Archer catch phrase are you tired of having repeated back to you?

Aisha: Its got to be Lana…I love you and appreciate you and I’ll give you a half hearted “what”, it gets weathered.

And it’s the shrieking! People are delighted by it and I try to put my ‘what’ back into it.

Casey: People ask me how I come up with catch phrases and I say they are pretty organic. Anything that works super well in the booth, Adam would say its got to come back. They are all things that organically happen.

Amber: That still happens now and there are times we have a reaction and we try it and it will come back.

Lucky: It’s like ‘smoke bomb’ wasn’t in the script but we bounced a few things around and ‘smoke bomb’ is the thing we all liked.

Judy: We also had ISIS first.

Casey: the Shazam Isis Hour and we had t.v. Michael Grey who was Shazam in the television show. I think we have to wrap it up.

Aisha: I have a question for everyone. Do you notice when you are on Zoom you don’t know how many times you touch your face but you star into the abyss if your own eyes. I’ve been touching my face a lot.

Judy: Now I want to touch my face.

Aisha: Wash your hands and don’t touch your face.

Casey: and if you do we can all be back together again. Before we go we have some big exciting news and you are hearing it first here. ARCHER’s 11th season will air Wednesday, September 16th at 10 p.m. on FXX and on FX Hulu. From our families to yours, we wish you the best and sincerely appreciate the continued support and until next time San Diego Comic Con family.