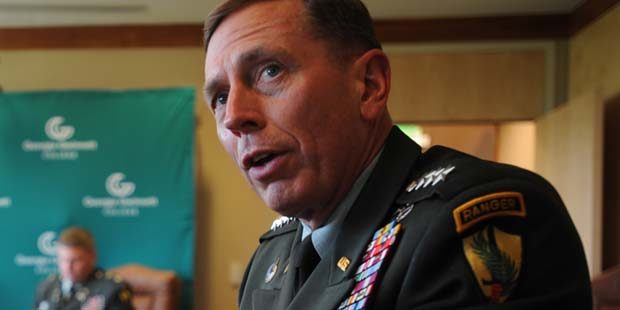 Retired Gen. David Petraeus was at the Nixon Library on Nov. 28 to “discuss the foreign policy of the Trump administration.” While the former CIA director touched on that topic, he spent considerable time talking about the 16-year war against Islamic terrorism and answered questions on a wide range of topics.

“If we had to choose between continuity and change,” Petraeus, 65, said. “You would have to come down on the side of continuity.”

He said that while many of then-candidate Donald Trump’s statements signaled he would prompt major changes in U.S. foreign policy, so far much has remained the same.

He did note some differences, specifically in the U.S. actions in Syria.

Under the Obama Administration, Petraeus said, it was “the stated policy of regime change in Syria.”

“But we obviously didn’t take sufficient action,” he said. “If action at all.”

He said he supports creating safe havens and enclaves in the war-torn country, along with enforcing no-fly zones to prevent Syrian President Bashar al-Assad from attacking his own people.

“Repeatedly we were told this is too hard,” Petraeus said. “But this is exactly what we’ve done.”

Petraeus said he believes the Russian president is trying to reassemble a Russian empire.

“He said in the previous century that the worst day in that century was the day in which the Soviet Union dissolved,” Petraeus said. “He sees himself as the leader of a great country, who had to be hugely vexed when President Obama labeled Russia a ‘regional power,’” he said. “He’s been trying to show ever since then that Russia is more than a regional power.”

The general added that Putin is the greatest gift to NATO, the western alliance established to keep the Soviet block at bay.

“NATO has a reason to live again,” he said. “President Trump may well claim some credit for pushing NATO countries to spend more on defense, and they have. But arguably it’s a bit more President Putin and concerns about the vulnerability of east European members.”

“He is not suicidal, and that’s a pretty big distinction,” he said. “He has acted at times very impulsively, recklessly, but at the end of the day, his No. 1 objective in life is to keep living, to survive, and I don’t think that he would jeopardize that in the end.”

While fears about North Korea’s nuclear capabilities increase, Petreaus said he thinks Kim’s goal is to use the country’s arsenal as a Cold War-style threat.

“What he wants to do now, is of course, to continue to develop the capabilities that he’s seen given up by say Kadafi, by Saddam, even by the Ukranian government, who have lost the deterrent that they might have had otherwise.”

He said China is the key to reining in North Korea and enforcing UN sanctions.

“China can literally turn off the lights in Pyong Yang if they want to,” Petreaus said. “They don’t want to. They don’t want to cause the implosion of North Korea and see the reunification of Korea.”

On returning to government

Petraeus said when he met with President-elect Trump that they went down a list of people for possible positions in the administration.

“He was trying to determine, ‘Can this guy help me turn the campaign promises and pledges into policies,’” Petraeus said.

“I had a list as well,” Petraeus said. “I had to convince myself that his views were not at a such a variance with mine that you probably should agree to go separate ways.”

Despite a positive mention on Twitter from Trump at the time, Petraeus was not chosen for any positions. Though he said he is willing to help any administration.

“I’m truly non-political,” Petreaus said. “I literally stopped voting when I was promoted to two-star. We haven’t registered for years.

“I’m not advocating this at all,” he added. “I think everybody should vote. It’s one of the rights that many of us fought to protect.”

He also said that the number of generals serving in the current administration is a plus, and not a sign that the country would be quick to go to war.

“It’s not just 4-star generals,” Petreaus said. “It’s 4-star generals with the experiences that these individuals bring. No one knows better than they do, because we all learned it together in very tough, unyielding battlefields that every problem is not a nail and the solution is not a bigger hammer.”

In defining his leadership style, Petreaus said it varies, noting that what worked in the Army would not work at the CIA.

Petreaus was invited to the Nixon Library by the Nixon Foundation and the World Affairs Council of Orange County, which hosts several events with prominent world leaders. More information can be found at www.worldaffairscouncil.org.