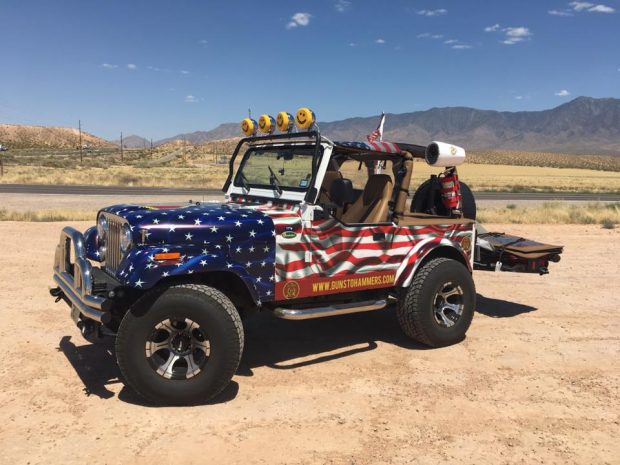 Guns To Hammers is a 501c3 nonprofit organization that provides Americans With Disabilities (ADA)-compliant remodeling services to our wounded Veterans, making their homes easily accessible, and they are teaming up with Fast Time and Nickel Brewing on their 21-day cross-country road trip on June 10. Fast Times will be hosting a meet and greet mixer for Guns To Hammers starting at 3 p.m. and Nickel Brewing will be pouring off two taps as a fundraiser for Guns To Hammers with $3 of every pint of Nickel beer going to the nonprofit to support their ongoing efforts.

After founding H-Towne & Around Remodelers, Inc., a successful remodeling company in Houston, founder, J.R. Smith, decided to redirect his time, money and energy toward this mission. As a former U.S. Marine, coupled with some guilt that he was able to leave the corps unhurt and able-bodied (unlike many), J.R. feels he has a huge sense of responsibility to his wounded brothers and sisters who are now living at home — many of them in need of various home improvements.

The Guns To Hammers mission is two-fold. First, providing remodeling services to wounded veterans, allowing them to live more independent lives, and second, training eligible veterans to manage and build ADA-compliant construction projects. J.R. believes connecting veterans with veterans proves to be invaluable for all parties involved, celebrating camaraderie and providing support to those who need it the most.

While this national tour is underway, the work never ends. Currently, Guns To Hammers has a crew hard at work in Las Vegas of a home of a former Naval corpsman – Ed, who just last November became confined to a wheelchair.

“We met Ed last year on our first national tour,” Smith said. “When we learned of this setback for him, this job became personal since we had met him last year in Vegas.”

This project is still underway and will be completed in mid-June, allowing Ed to have full access to his home.

When this work is finished, Ed will have a home he can now function in. There are news stories on his plight posted on the Guns To Hammers Facebook page, as this story continues you can follow it as concludes on their page (just give them a like-share and follow to stay tuned in).

However, like many nonprofits, Guns To Hammers is under the consistent state of fundraising. For example, the project at Ed’s home is still $8,000 underfunded. The Las Vegas community has pulled together with on-going efforts on many fronts.

The veteran-owned The Leatherneck Club have been hosting fundraiser nights since the project started in April. Tenaya Creek Brewery has been donating $1 for every pint of their flagship Bonanza Brown Ale sold in their tasting room since April, continuing through July 5. The Findlay Automotive Group is making a donation for each car sold through its Kia and Volvo dealerships in the month of June.

With all this going on, Guns To Hammers will be at Fast Times on Sunday, June 10 at 3 p.m. There will be a few new, special announcements and a killer band. Fast Times is located at 3065 Clairemont Drive, just up the hill from the I-5 exit. The doors open at 11 a.m. and the event kicks off at 3 p.m.