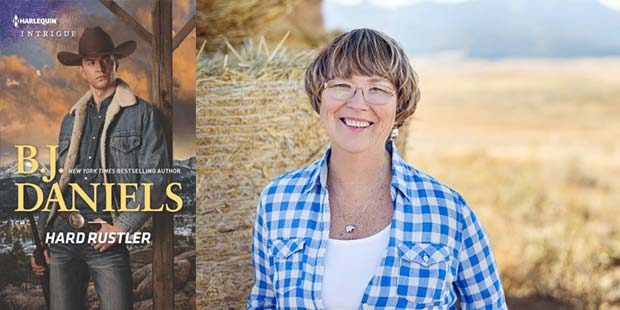 “Hard Rustler” by bestselling author B. J. Daniels brings to life the Montana countryside. Readers will enjoy the characters, setting and mystery. The plot is a modern-day version of past Westerns.

The setting is very important and Daniels based it when “I moved to Montana from Texas at the age of 5.

“I write what I see and know about,” Daniels said. “The Western way of life is all I have ever known. It is a much simpler way of life. We now live in a small town where most people are rancher cowboys. As in the story, it is isolated, with the closest Target Store three hours away. Someone can be driving either 60 miles south or north and they will not see anybody all day. In the book, there is a scene like that where Annabelle had run out of gas and she feels completely alone and secluded. This is all true to life. I always have food and a blanket in the car in case it breaks down because cell phones do not work here.”

The story begins with a city gal, Annabelle (Annie) Clementine, traveling back to her hometown of Whitehorse, Montana. After high school, she decided to escape the monotony to become a famous model, leaving her love interest behind. Now, 13 years later, she is back to sell her late grandmother’s house and to get out of town as soon as possible.

The one problem: She is destitute with no money and seems to depend on her ex-boyfriend, Dawson Rogers, to rescue her. He helps by bailing her out so her car is not repossessed, siphoning off gas and saving her life. It seems someone wants to find something in her grandmother’s house that has been hidden for years and is willing to kill for an answer. Annie and Dawson must sort out the mystery and determine what her grandmother was hiding.

Daniels wrote Annabelle as “someone who wants to do something with her life, a desire to succeed. This happens a lot with Montana children who leave to get a job but often come home to raise their children. In this story, she comes home with her tail between her legs. I think at the beginning of the story she is a snob, arrogant, and determined. Later those qualities come out as spunky, strong, and a risk-taker. She and Dawson at first appear to be opposites. She has a driving ambition and he is satisfied with the simpler things in life. After being high school lovers, he knew he had to let her go and sensed she had this restless streak. This is why he did not fight more for her to stay. When she came back she started to realize what was important in life. She had sowed her oats.”

As with most westerns boy meets girl, boy loses girl, and boy gets girl. This novel has that and more, inputting modern day issues into a suspenseful mystery.