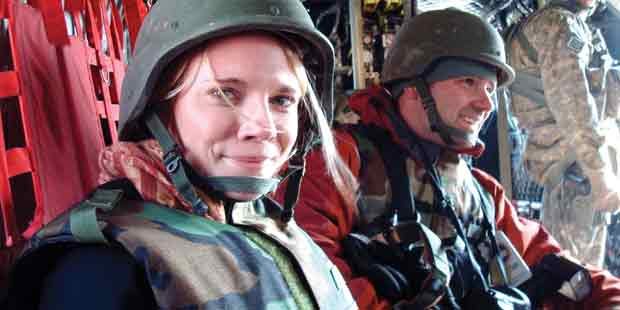 “The Heart of War” by Kathleen McInnis combines political drama with political satire. Using her extensive inside knowledge, she is able to create a realistic look at how the military machinery works while at the same time having well-developed characters.

There are many tidbits about the Pentagon. In the beginning of the book, it was if the reader was taking a journey through the halls of the building, including the “Flag of Faces,” an off-kilter American flag that is actually a quilt where each square has a picture of those who died there on Sept. 11, 2001.

“I wanted to allow the readers to understand what it is like — the little details that provide a sense of awe,” McInnis said. “The Pentagon is full of people who are doing their damnedest to ensure that the president is given the best options. It is actually a very human place, filled with people that work every day with imperfect information, each with their own personal and professional struggles.”

McInnis has worked in the Pentagon and think tanks on both sides of the Atlantic. With a PhD in war studies, she now works for the U.S. Congress, helping to analyze international security and defense issues. But she is also a self-imposed “base brat,” whose father worked extensively with national security issues.

What the main character, Dr. Heather Riley, and the author have in common is their PhD’s and their professional experience of working at the Pentagon.

“All the characters reflect some part of the writer,” McInnis said. “Heather’s wide-eyed experience getting into the Pentagon and observing the obscurities are very real. We also have the same motivations, supporting the men and women serving and their families. Sometimes military force is necessary and Heather and I want to make sure we give those in the military what they need for the best chance of success including the right strategy. As a woman, you need an air of authority and confidence.”

However, the rest of the story deviates from McInnis’ real-life, since Heather had a brother, Jon, killed in Afghanistan by the Taliban. She goes to Washington hoping to save those serving with a plan to make sure the warlords and terrorists did not gain the upper hand, and to have someone like her as the guardian angel to those fighting terrorists overseas. A powerful quote, “What if a Pentagon bureaucrat was more concerned with buying multibillion-dollar aircraft than finding ways to make Jon’s body armor grenade-proof.”

“My story is very different because I was not a ‘peace-nik,’ as Heather was originally,” McInnis said. “I’ve never had the kind of visceral discomfort with the military or the broader national security community — probably because I was raised around military bases. These aren’t evil warmongers. They are just people trying to protect our country. They are the people least likely to recommend going to war because they don’t want to see their friends and colleagues suffer.”

On Heather’s first day her position is eliminated and she’s shuffled to a war-fighting office focused on combating Russian aggression. Unfortunately, she knows little about Russia and has deep moral reservations about war. Making matters worse, she’s also working for Ariane Fletcher, someone who loves to deflect the blame and wants constant perfection.

Yet, Heather learns to navigate the Pentagon’s insane bureaucracy and petty power struggles to become a “go-to analyst,” someone who can be depended on for well thought out opinions.

Fletcher is called the “Wicked Witch of the Pentagon.” She is considered a terror, “someone I wrote who had to swim through a sea of the male dominated military,” McInnis said.

“The DOD has masculine traits to it. She is inspired by a composite of several different female leaders in the national security community that either I or friends have been exposed to. Although I found some amazing sisters who believed in mentoring other women, there are some women I interacted with who were vicious to each other. In the book, Col. Voight refers to Fletcher as ‘pink on pink violence.’ She adopted a more aggressive, cut-throat behavior.”

This is a smart, funny, and an informative story. Anyone who wants to understand the workings of the Pentagon should read this novel.