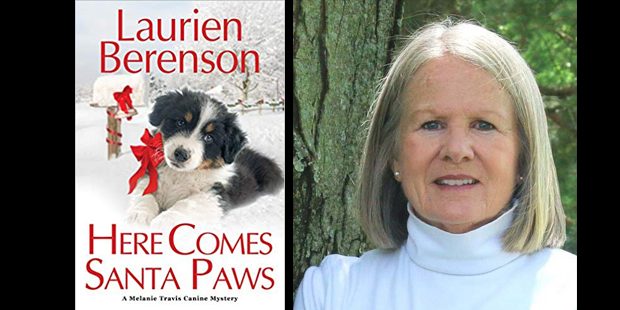 Here Comes Santa Paws by Laurien Berenson blends a cozy mystery with fantastic characters along with tidbits about dogs.  As the story progresses readers attempt to solve this “who done it” murder right with the main character Melanie, ever the amateur sleuth.

“Melanie is like a good friend of mine who has a lot to say.  I am invested in these characters. Since I am also a reader I relish plots that are character based, and mine is certainly that way. I enjoy writing a series because with standalones the characters are missed and there is the feeling that they are lost, similar to when a friend moves.”

The plot begins with Melanie’s Aunt Peg calling her to announce someone left three Australian Shepherds puppies in the Christmas stockings at the end of her driveway. While visiting her Aunt and playing with the puppies Melanie gets a frantic call from her good friend Claire Travis, now married to Melanie’s ex-husband.  Taking on a personal shopper gig in the affluent town of New Canaan, Claire gets more than she bargained for when, after dropping off some gifts, she stumbles over her newest customer’s dead body in a private estate. The homicide victim Lila Moran has a secretive and untraceable past that might be tied to a reclusive but well-known socialite. Melanie must be very careful not to be seen as a suspect by the police as she gathers disturbing clues.

“The main dogs in the story are poodles since I have been a poodle person for over thirty years.  They remain the dog breed of the books.  But my editor wants me to branch out and be more dog oriented.  Now the books have another breed featured along with the poodles.  I do feel an obligation to show people how much fun the world of dogs is, and to educate people about dog breeders, how they behave and what they do. I also want to show that dogs are a stress reliever when things go wrong.  They have a way of pulling people out of themselves and making them feel better. They give unconditional love.”

Anyone who has not read Berenson should venture into this cute and humorous mystery. The reader will feel they are a part of the story whether investigating the murder, playing with the darling puppies, or setting up holiday decorations.