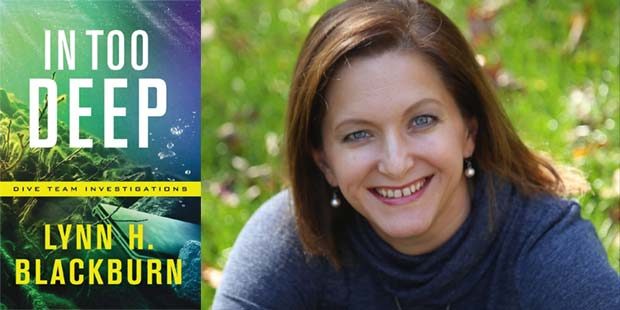 “In Too Deep” by Lynn Blackburn blends romance, suspense and a riveting subject matter — labor human trafficking. The first book of the series was good but this book is excellent.

“When people hear about this subject matter they think about sex trafficking,” Blackburn said. “I did not realize that labor trafficking also exists. A lot of people that have to endure this have either entered the country legally or thought they entered legally, doing it the right way. Many times, they had their papers taken, threatened physically, or had their families threated physically. There is the underlying fear of law enforcement since they usually do not speak the language and have a hard time communicating. It is a horribly abusive system. Restaurants and hotels, many in the hospitality industry, are able to ‘hire’ these people without facing consequences.”

The novel begins with a partially submerged car that drives off a bridge, killing the woman occupant, where readers might think of Chappaquiddick. After recovering the body, the Carrington North Carolina dive team finds an encrypted laptop, and an unsettling connection with investigator Adam Campbell concerning a message written on the woman’s tummy in permanent marker. They enlist Dr. Sabrina Fleming, a professor at the local university with unparalleled computer security and forensics skills, to recover the files from the laptop.

“I wrote her as brilliant, cautious, and leery with trust issues. She is also resilient, analytical, and blunt. I think she acts like Bones from the TV series because she is not materialistic and can by nerdy, always focused on her work. Her looks were based on a few pictures I saw of Evangeline Lilly, one with her hair messed up in a bun, and the other beautiful in a drop-dead gown.”

Through their investigation it is found that human traffickers are threatening people, forcing them to become employees with slave labor wages. The way the author tackled this tough question was done very well and extremely informative.

“With this genre, when tackling a heavy subject like trafficking, there is only so much I can write about because I also need to put in the romance and suspense. This was some of the hardest writing I have ever done. Those of us that live a comfortable suburban life tend to think it would never happen here, but somewhere else. It is not happening in a faraway place, but in our communities.”

As intense as the human trafficker subject issue is, Blackburn does a great job with the dialogue and banter between the characters. The series does not delegate the previous book’s main characters, Leigh and Ryan, to a cameo appearance, but gives them a prominent role in this book. All the characters’ interaction has the reader feel as if they were also a part of the sarcastic conversation. This camaraderie brings the story and the personalities to life.

The relationship between Adam and Sabrina is also intense. It develops slowly, since she is clueless when it comes to reading his social signals. Although brilliant, she has a hard time determining people’s body language and verbal hints.

“It was fun to explore the relationship between Adam and Sabrina. She analyzes it too much. When she grew up she was wealthy, but now lives an astute life with very few possessions. Yet, she has fallen for the wealthiest guy in town. She considers money a negative. But now she has to take a leap of faith and hopes to get her heart to override her brain. Adam sees in her what she cannot. He is a protector, peacemaker, loyal, and family minded. He is not a daredevil like Ryan. I projected myself in the scene where his mom comes home and rushes to him.”

The story has a lot of suspense, family drama, and romance. Although each book revolves around four members of an investigative dive team, plus a computer expert, and a nurse, readers will enjoy that each gets their share of page time with the concentration on a different hero and heroine.