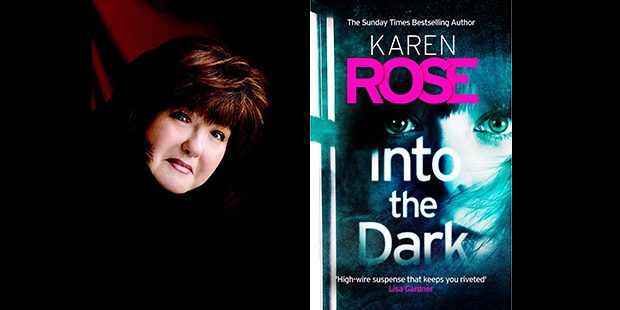 With Into The Dark, Karen Rose has outdone herself, which is hard to do. This story is a great read for the holiday season: full of intense scenes of suspense, a sprinkle of romance, and great characters the readers will fall in love with.  The core of the story is finding acceptance, trust, and love while struggling to avoid extreme danger.  But an added bonus is how Rose delves into subjects such as living with the handicap of deafness, being HIV positive, and child abuse.

“Since I also have Waardenburg SyndromeI didn’t realize I was subconsciously writing about it with Deacon’s character until it was on the pages with his white hair and unusual eyes, a blue and brown eye. I am deaf in one ear and my daughter is completely deaf.  It is a genetic condition that primarily causes deafness and lack of pigmentation.”

The story opens with a bang as teenager Michael Rowland is being chased by his stepfather, while carrying his younger brother Joshua. Michael knows that Joshua is going to face a fate worse than death after seeing his stepfather drug the younger boy. From his hiding place, he sees a man murder his stepfather. Not knowing what to do, yet having a sense of safety, hoping that the danger has passed with the stepfather’s death, Michael and Joshua return to their home.

Everything appears back to normal as Michael realizes that his drugged-out mother will not be able to pick up his brother from soccer practice. As he shows up, the soccer coach Diesel Kennedy realizes Michael is bleeding from his head. Knowing something is dreadfully wrong, he convinces Michael to accompany him to the clinic where Dr. Dani Novak works. Once she examines the boy, it’s obvious he’s been abused and is deaf.

Because of the abuse, both Michael and Joshua have to be put in a foster home.  Dani is an emergency foster parent for deaf children and decides to take both these boys into her home.  She knows she can help Michael because she is deaf in one ear and has learned sign language. She and coach Diesel decide to work together to protect Michael and Joshua from their mother and the killer who wants to eliminate all witnesses. Besides trying to keep the children safe, Dani and Diesel also are dancing around their feelings for each other, attempting to overcome the emotional baggage. Their support group of friends and family come together to help in both cases.

“I want the drama in the book to be the aftermath.  I like to take a page out of the old movies where the body is shown without blood and viewers see the reaction of the on-lookers.  Many times, these scenes are scarier and people get a lot more emotionally involved. I showed how Michael feels embarrassed, fearful, humiliated, and scared.  Probably because society tells men who were abused, they are somehow less of a man.  This is why I wrote the scene where Diesel tells Michael how it happened to him also.”

After reading this novel, people will wish this heartbreaking and emotional story never ends. The protagonists are complex and caring with good hearts who teach each other how to trust again. The mystery is intense and will keep readers guessing until the very end.