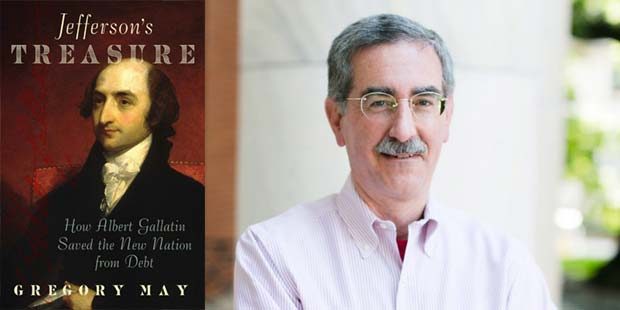 “Jefferson’s Treasure,” by Gregory May, details “how Albert Gallatin saved the new nation from debt.”

Appointed by President Thomas Jefferson to be his treasury secretary, Gallatin continued under President James Madison, maintaining that position for 12 years. During his tenure, he abolished internal revenue taxes in peacetime, slashed federal spending and repaid half of the national debt.

So who was this man that undid Alexander Hamilton’s fiscal system, rejecting it along with Madison and Jefferson? Because both presidents did not understand the financial system, they depended on Gallatin to reform it. Gallatin arrived in America in 1790 from Geneva and rose up to become a trusted adviser of the Republicans. Six years before Jefferson was elected president, Gallatin’s Pennsylvania neighbors rebelled against the tax on whiskey. He supported them in principle but opposed the violence that ensued, burning the local tax collector’s house, robbing the mail and marching on Pittsburgh.

The play “Hamilton” uses revisionist history. The real Hamilton believed in big government and wanted to continue funding federal deficits. He based his theories on the British, who used the money to fund their large military conflicts, believing that the ability to borrow endless amounts of money would allow the new United States to become a great nation.

Jefferson and Madison thought Hamilton’s system, straight from the British way, was tainted with tyranny.

“It made the people pay obnoxious taxes in order to fund interest payments on a mounting federal debt and the costs of an expensive military establishment,” May said. “It shifted money from ordinary taxpayers to the relatively few rich men who held the government’s bonds. That was just the sort of thing that had led Americans to revolt against Britain in the first place.”

May believes, “The hip-hop immigrant hero of the Broadway musical is a myth. The musical might be a great work of art but is relies on misconceptions of Hamilton. He was not an immigrant, but a migrant within the British Empire. Also, he was not a man of the people, as Gallatin was, but an elitist.”

While Hamilton committed to paying only the interest on the government’s debt, Gallatin committed the government to repay fixed amounts of the principal each year. He also insisted that the government should never spend more than it earned except in times of war. By slashing federal expenses, Gallatin was able to get rid of the tax on whiskey and abolish the entire internal revenue service.

The Republicans, born out of an agrarian society, distrusted these elitists where two-thirds of the government debt belonged to a few hundred very wealthy men residing mainly in Philadelphia, New York and other mercantile cities. They saw Hamilton’s plan of collecting taxes from ordinary citizens as a way for a few rich men to become even wealthier. Implementing these excise taxes required government officials to inspect, quantify and mark the items subject to tax.

The Hamilton system benefited the wealthy debt holders and spectators at the expense of the average taxpayer who had to pay the interest. The government would borrow more than the people could pay. Hamilton tried to hide how much money the government was actually spending and spiraled the debt higher and higher.

This was an important part of the British tax base, and “I wanted to show how unpopular it was,” May said.

“Hamilton and company were resented because they created a tax collection network that affected the lives of ordinary citizens. The excise tax is a form of internal taxation, while tariffs are a form of external taxation that fell on the well to do. Remember mostly the well to do bought imports. The Republicans once they came to power relied on import duties rather than excise taxes.”

May further explained, “When Jefferson and his administration came to power, it was Gallatin who got rid of Hamilton’s deficit finance system and cut taxes. By the time he has left office he has repaid half the federal debt and set up a program for repaying the rest.”

Anyone who wants to understand the early economic systems of the Founding Fathers will enjoy this book. It shows how Gallatin, by killing Hamilton’s financial system, abolished internal revenue taxes in peacetime, slashed federal spending, and repaid half of the national debt.