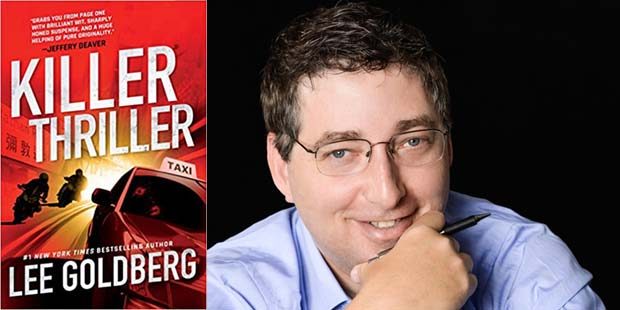 “Killer Thriller” by Lee Goldberg blends suspense and action, with a lot of humor. With this series fiction becomes reality.

“I know so many authors who write kick-ass, high-action thrillers,” the author said. “If put in the same situations as their heroes, they might not fare very well. Many are balding and overweight. Would they be more resourceful than I might think? After all, while they may not have the physical attributes, experience, and training as their protagonists, they do think the same way. Many writers’ protagonists have a deductive genius with incredible observational skills, or are brilliant thieves able to plot elaborate heists, or are clever con artists able to pull of outrageous scams. Maybe the writer might have those same talents and does not realize it?”

This plot has a deadly, global conspiracy by Chinese intelligence trying to topple the United States. Ian Ludlow, a bestselling author, is known for his thrillers whose main character is larger-than-life operative Clint Straker. Because his stories have a tendency to come true the CIA and other national security agencies have taken notice.

But the Chinese intelligence services also believe he and his companion, Margo French, are foreign assets who are using the cover of researching his next novel. This might remind readers of the real-life Department of Homeland Security’s Analytical Red Cell program, which asked authors to come up with scenarios of how the terrorists would launch an attack.

“My brother Todd was writing a book with Brad Meltzer,” Goldberg said. “Over dinner Brad mentioned how he consulted with Homeland Security. I know several authors who did this as well. They were asked their opinions because they have the imagination to come up with situations. I guess their brains were picked because the authors might see things that had not been thought of. Then I read a column by crime writer Lawrence Block. He wrote about another author whose identity was stolen and complained that the police were doing nothing. Block suggested the author should do what he would have his hero do. Basically, approaching the crime, the same way as his hero. I put all of these stages together in my head where an author was put in the same kind of jeopardy as his character. I am hoping he rises to the occasion.”

Now in Hong Kong to research details for his next story and to observe the filming of one his novels, he and his assistant Margo get more than they bargained for. Seeing them as a threat, the Chinese attempt to assassinate both. Suddenly, Margo and Ian find themselves in a real-life adventure where he must use his writing skills to help them escape.

“I am tired of thrillers and police procedurals that have no humor. I know from my own life experiences that humor arises from the darkest times. I find books without humor really boring and flat. I think I am walking a fine line between writing a thriller and poking fun at them, but not like Austin Powers, Maxwell Smart, or Inspector Clouseau.”

This is a fun read because the humor does not stray into Never Never Land but is a dry, clever, sarcastic banter. The characters are fun, witty, and flawed. They are not super-heroes so the scenarios are believable.