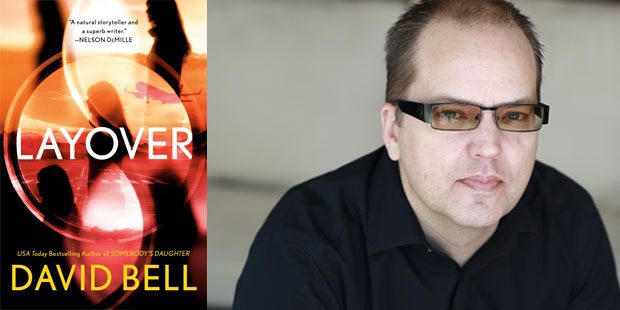 “Layover” by David Bell has an intriguing concept that plays off rescuing the damsel in distress. Readers will see how the main character Joshua Fields fate is sealed with a kiss.

“I was inspired by something I really observed at an airport,” Bell said. “I was at a bar waiting for a flight where I observed this couple across from me having an intense conversation. They seemed so familiar and intimate with each other. The woman got up and kissed him passionately as she left. I heard the man say to the bartender ‘that is the strangest thing that ever happened to me in my life. I just met that person. Now she is going off to her flight and I will never see her again.’”

The book begins with a chance meeting during an airport layover, while waiting for the next flight. It is here that Joshua meets Morgan, a beautiful stranger and buys her a drink. After a bit of conversation as she leaves to catch her flight, Morgan passionately kisses him. Seeing on TV that Morgan is considered a missing person he throws caution to the wind and buys a ticket for her flight. This is where the adventure begins as he and Morgan play a cat and mouse game with each other, the police, and someone after some stolen valuables.

Some readers might have a hard time believing the lengths Joshua goes to in helping this stranger he just met. Yet, readers can believe that Joshua’s life is one continuing loop. He feels like a fly caught in a spider’s web where he cannot escape his dull routine. Raised by a single doting dad he is now part of the family business. He keeps going because he doesn’t want to disappoint his father. So when an attractive woman who needs his help shows up Joshua jumps at the opportunity. The problem is the journey is dangerous and he ignores the advice given to him by Laurel Falls Kentucky Detective Kimberly Givens that Morgan could be involved in the murder of her boss.

Bell noted, Joshua is considerate, altruistic, clean-cut, attractive, smart, successful, and definitely impulsive. Right now he is in a rut because his job is not fulfilling and he is looking for a change. Along with the main female lead, Morgan, it is a coming of age story for both characters.”

The story takes the reader on a journey as they try to discover what is true and what is false along with Joshua. There is plenty of lies, deceits, and secrets that fill the pages.