“Married to the Army: Alaska”

Sometimes it’s difficult to be a military wife. The long deployments, the lack of communication, the inconsistent pay rises, the high percentage of divorces, on and on. But what if both people are in the military, separate deployments…..what about the kids? Now you have to find a place for the kids to stay, a legal proxy for the family, etc. Because sometimes family, friends, in-laws, grandparents aren’t always an option. I too was once a military wife but I only had to endure one deployment and it was only for three months but it felt like an eternity nonetheless.

Lifetime TV has a show called “Army Wives,” it’s a show made up of actors and actresses about Army life and everything that goes with it, but it’s just a show. Although it features story lines about various situations on a factious Army base, the stories are not real, .but probably not too far from the truth.

“Married To The Army:Alaska” was a show on the OWN Network, it focused on the real lives of seven women whose husbands (all with various ranks) all in the Army and stationed in Alaska. I was pretty intrigued by the premise of the show and backdrop of Alaska so I interviewed the creator of the show: Stephanie Drachkovitch. 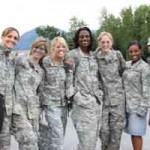 Q. What inspired the show about Army Wives, are you a veteran or a military spouse?
A. I’m an Army brat. My dad retired as a LTC after a 20 year career in airborne infantry, so I grew up moving around from post to post with my dad serving in Vietnam. Fast-forward to around 2006, and the Iraq War was on the news every night. I could turn off the tv when I was tired of it, but it struck me that no one was telling the story of the families whose loved ones were serving. I began what became a 5-year quest to convince the DOD (Department of Defense) to allow us to “embed” with families and tell their stories.

Q. Why the base in Alaska as opposed to the beautiful, warm, city of San Diego (the home of the Pacific Fleet) for a show back drop?
A. LOL! I would’ve loved that! We put out a casting notice and received submissions from all over the country. Every year we’d go back to the DOD and ask if they’d reconsider, but every year the answer was still no. But in 2011, a Black Hawk wife from Fort Wainwright contacted us with her friends, and I thought the Alaska angle was a fresh one. We went back to the Army with the Alaska cast idea, and they responded. The timing was better for the Army—they felt more comfortable allowing cameras in at this point because they also realized the importance of getting those stories in front of the American public after ten years of war in Iraq….and Alaska was training ground for rapid deployment forces. They loved the idea of telling their stories.

Q. Has the show been well received and will it return for another season? If so, will it be based in Alaska again?
A. The show has been very well received with very positive reviews from places like the NY Times, Variety, TV Guide, Philadelphia Inquirer, etc. Unfortunately, it did not attract enough of an audience on OWN for the network to proceed with a second season.

Q. How difficult was the casting process?
A. We got our official “green light” to proceed from the Army around the end of October; Gen. Wiercinski (Commanding General, US Army Pacific) really wanted us to be able to shoot the 4-25’S deployment ceremony on Nov. 29, so we only had a few weeks to put casting into motion. In 2.5 weeks, we had 500 submissions from Fort Wainwright and Fort Richardson. We narrowed it down and ultimately put 60 spouses on tape between the two posts. The network then narrowed down that group to our final seven.

Q. There was one episode about a fashion show, did the women wear their own fashions in the show or was there a stylist to assist their wardrobing efforts?
A. The women were wearing clothes provided by the fashion show sponsor, LULU E BEBE, one of the top boutiques in Anchorage. They had stylists doing their hair and makeup. Our cast member Sara Dunlap was chosen as emcee and had the time of her life!

Q. Your company 44 Blue Productions works with a variety of networks with various reality programming options, how has the reality genre changed since you created your production company?
A. Wow, that’s a great question. It’s changed a lot! The network landscape is so crowded now that show concepts and/or cast have to be big, loud and get instant traction for a network to get ratings and continue with subsequent seasons. The casts and situations have to more outrageous to get that attention through all the clutter. Shows really only have one airing to prove themselves. If they don’t get a rating in that premiere episode, it’s the hook!

Q. If someone was interested in upcoming casting opportunities for any of your programs, what is that process?
A. We are always looking for unique characters, access to worlds never seen before, and unusual “fish out of water” situations—i.e. the out of the ordinary. They can contact us at: RECEPTION@44BLUE.COM. They can also check our 44 Blue Productions Facebook page and website: WWW.44BLUE.COM for casting needs. But for best results, if people think they or their world could center a show, is to send us their story. If it is a concept, we do require them to sign an Idea Submission Form first.

Q. I think it would be equally interesting to do a show about men waiting on returning wives in combat zones………what are your thoughts in regard to that?
A. We would have loved to include a husband whose wife was deployed in “Married To The Army: Alaska,” but we just didn’t have enough men interested in participating, which we understood at the time. If we had been able to go to a second season, I think we wouldn’t found more men interested. They are truly the invisible “heroes on the other side of the battlefield!”

Q. Do you have any parting words for the readers of Military Press?
A. As an Army brat…and now a non-military mom of three, I just want to thank all those who are serving and their families for their sacrifice and commitment. They’ve all volunteered. And after spending the last year working so closely with the Army and embedding in the lives of our seven families, meeting their husbands, I was continually reminded how lucky we are as Americans to have soldiers of such high quality and integrity serving our country. Had they chose any other line of work—they could be entrepreneurs, corporate execs, teachers, lawyers….whatever …living at home, seeing their families each night at the end of a long day at work. But they have chosen to serve their country because they believe so much in what we stand for. I THANK YOU ALL!

Even though “Married To The Army:Alaska” didn’t get renewed, another show produced by Stephanie’s company was renewed for a fifth season, “Pit Bulls and Parolees.” CONGRATS!


Jackie Thomas is a proud Navy Veteran. She has represented designers from Project Runway, Project Runway All Stars, All On The Line, etc. She produces celebrity fashion shows all across the country and abroad. She’s also a Guest Speaker for FIDM (Fashion Institute of Design & Merchandising) in San Diego. Visit Veteran Fashionista on Facebook.