Medal of Honor goes to vet who saved dozens 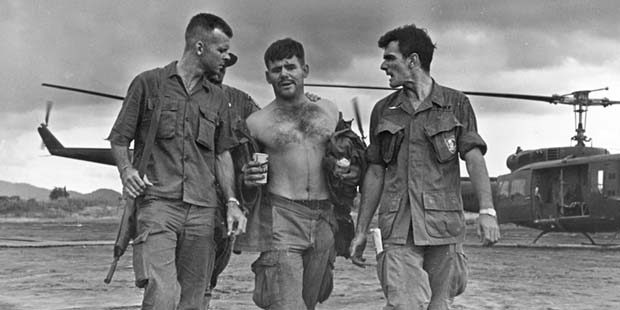 Army Capt. Gary “Mike” Rose received the Medal of Honor at a White House ceremony Oct. 23 to commemorate his heroic actions during a four-day mission known as Operation Tailwind during the Vietnam War.

On Sept. 11, 1970, then-Sgt. Rose was responsible for 136 men who were inserted about 44 miles into the Laos jungle. They soon came under fire from waves of enemies, and the fighting didn’t let up for four days as Rose and his group marched deeper into enemy territory.

As men in his group began to fall, Rose was there to help them, even if it meant he had to run into harm’s way. He shot at the enemy in order to get the fallen back to safety, crawled from position to position, and encouraged and helped direct the fire of inexperienced Vietnamese and paramilitary troops fighting on the Americans’ side.

Rose was wounded several times, but most severely on the mission’s second day. He had pulled a wounded soldier back to safety when a rocket-propelled grenade landed nearby, spraying him with shrapnel in his back, leg and foot, which was severely crippled. But despite his pain, he continued on with his mission, hobbling around on a stick for a crutch, ignoring his own painful injuries so he could treat the wounded.

At one point, Rose risked his life to help injured soldiers into a hovering helicopter, but the enemy’s fire targeted the chopper, and it had to abort the rescue. It crashed a few miles away.

By the last day of the mission, more than half of Rose’s company had been wounded, and they were surrounded by more North Vietnamese troops than they could handle. They had to evacuate. But setting up a landing zone perimeter was difficult under fire, and many more men fell. Rose continued to retrieve each man and treat him, despite his pain and the fact that he was completely exposed to the enemy.

As the extraction helicopters came in, Rose stayed on the outside perimeter to repel the continuous enemy assault. When he finally jumped on the last leaving chopper, enemy soldiers were within 50 meters of him.

At about 4,500 feet in the air, the helicopter was hit by anti-aircraft fire, and Rose heard the engine stop. But before the chopper crashed, in typical Rose fashion, he saved the life of a Marine door gunner who had been hit in the neck after takeoff.

Rose was thrown from the aircraft just before it hit the ground. Dazed but OK, he crawled back to the fuel-leaking helicopter to move the injured men inside out of the way of a possible explosion. He kept giving aid until another helicopter came for them.

Even after he returned to base, Rose refused to get treatment until his men were tended to first.

There were a lot of men wounded over that four-day mission, and only three died. Yet, thanks to Rose, the lives of up to 70 men were saved. His devotion, professionalism and extreme courage under fire reflected great credit upon him. That’s why he’s receiving the Medal of Honor.

Rose is the 18th Vietnam veteran from the 5th Special Forces Group to receive the nation’s highest honor for valor. Eight of them have been awarded posthumously.

After his recovery, Rose continued his Army career. He spent time in Panama before attending Officer Candidate School, where he was commissioned as a second lieutenant in December 1973. He went on to get his bachelor’s and master’s degrees before retiring as an Army captain in May 1987.

The Army hero said he was excited to receive the Medal of Honor, but he insisted it was earned by all the men in his group.

“That medal, to me, recognizes finally the service of all the men in all those years that served in MACSOG (Military Assistance Command Studies and Observations Group). It’s a collective medal from my perspective,” he told the Army News Service. The medal, he added, represents “all the courage and honor and dedication to duty that those men served.”