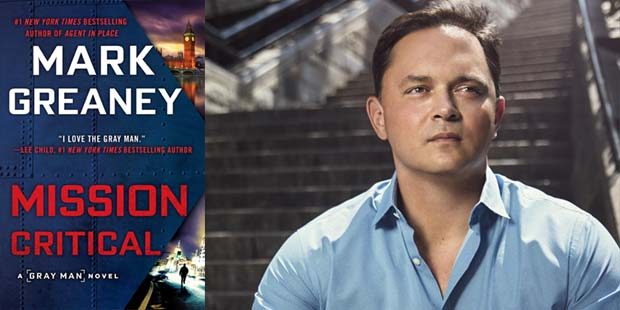 “Mission Critical” by Mark Greaney is a suspenseful, action-packed thriller. Readers will be delighted with the return of Zoya Zakharova, a female “Gray Man” and a kindred spirit. Greaney has the knack of intertwining geopolitics with first-rate characters and non-stop action.

This novel combines two plots in one. The CIA must uncover a mole within its midst, while a special ops group, code named Poison Apple, must uncover who is behind a bioweapon attack and where will it take place. One of the CIA’s most important contractors is Court Gentry, known as The Gray Man, with the code name Violator. He does off the books ops for Matt Hanley, deputy director of operations, and Gentry’s handler, the ambitious Suzanne Brewer.

The plot begins when he is asked to return to Langley on a CIA transport plane that first must make a stop over in London to drop off a prisoner. Unfortunately, they are compromised and many are killed, with the prisoner kidnapped. Court assists in finding out what happened, which reunites him with his former lover, Zoya.

Zoya, the female lead in a previous book, “Gunmetal Gray,” is Gentry’s equal. Now a CIA asset, part of the Poison Apple program, code named Anthem, this former SVR Russian intelligence agent escapes from the safe house to find her father who she thought had been dead. Both her mother and father were valuable Russian spies. Dad was the GRU director, Gen. Feodor Zakharov, while mom trained Russian operatives’ in language and proper dialect skills, grooming them to live in England or the United States as natives. After finding out her father’s mission she and Gentry, now joined by the third asset in Poison Apple, Zach Hightower, code named Romantic, must stop the terrorists at any cost.

This book shows why Mark Greaney has a legitimate claim to be one of the top, if not the top, thriller writers today. There are so many twists and turns readers will be kept on their toes throughout the story of betrayal between Brewer and her team, as well as with Zoya and her father.

Mark Greaney: Two books ago I wrote the character, Zoya, a Russian spy. Her father was the head of GRU. I thought about how there could be an interesting backstory on him. Simultaneously, I had the idea for a terrorist attack on all five of the English speaking intelligence agencies. I weaved together these two major plots.

EC: You include the Russian mob and the Spetsnaz.

MG: I wanted to show how the mob is a bunch of trained thugs, while the Spetsnaz are trained military and Special Forces. This unit is a catch all for those in military intelligence, the regular military, and the domestic intelligence unit. They are the elite. I put them in to have the Americans come up against a formidable foe they didn’t expect.

EC: How would you describe the main female character, Zoya?

MG: She is a type of chameleon. Raised in different countries, she was taught to blend in, to melt into the different fabrics. I see her as a force for good. Yet, I think she sees herself as a little less than that, which allows me to be able to move in different directions with her. I do not think she is as moralistic as Court and is more out for herself. She is not as altruistic as he is.

EC: Traitors seem to be a very relevant topic today.

MG: Leaks happen all the time, but we are hearing a lot more about them. People are bought and paid for to sell secrets. I did research on real cases and read books on the real spies. In this book, the character who was the traitor helped the antagonists with their desire to spread a biological weapon.

EC: We do not hear much about biological warfare these days.

MG: I think because it needs a nation state behind any attack, and if that happens I am pretty sure that country would get nuked. With the advancement of antibiotics the plague is easy to treat. I played around with it to have people exposed unwittingly. This means the highly contagious disease can be easily spread to anyone who comes in contact with that person. It can be fatal if people are not treated in enough time.

EC: Did you ever practice the action scenes written?

MG: I went to a three-day stunt driving school at the Atlanta Motor Speedway. I wanted to write the car chase scene as realistic as possible. I did the J-turns, the 180s and the drifting. I did almost everything Court did in the book except crawling in the back seat and shooting out of the back window. I actually went into reverse at a pretty high speed.

EC: You did that maneuver?

MG: Yes. I looked over my shoulder and took my right hand to the 9 O’clock position. Then I moved the steering wheel as hard to the right as possible, did a 180-degree turn and floored it. I had to be careful because instinctively my foot always wanted to hit the brake as I was spinning out of control. I literally had to kick my heels back so it touched the seat. I had Court do something similar.

MG: A little. I made one of the antagonists, Joe Hines, not a martial arts guy, but a boxer. I wanted him to be a big brute that can take people down. I think Court is over matched regarding the physical fighting. I like exploring the vulnerability of the protagonist even with all his skills. I hope the reader will not consider the Gray Man a super hero.

EC: You also explain some technology, such as the finger touch phones.

MG: New phones need a pulse on the finger. Someone has to be alive so no one could cut off a finger and use it. Interestingly, the I-phone X is facial so a dead guy’s face could be dragged to open the phone.

EC: Please explain the relationship between Suzanne Brewer and Court.

MG: I hope you think she is an unlikeable character. She realizes running the program Poison Apple will absolutely not advance her career and she will never see the seventh floor at Langley to climb the ladder. This motivates her to show her true colors.

When I first wrote her she was pure evil who did a lot of dastardly things. I think by having her in this position her superiors are playing with fire. She basically only looks out for herself and knows running this outfit will not get her promoted. If she could, she would have those she manages walk into a fire pit and get killed.

EC: Is Zoya coming back and would you ever have her rescue Court?

MG: I have left that open ended. I know readers like her and want her to come back. Since there is a lot of depth to her character, I suspect she will be in later books. Regarding rescuing Court, I totally would. There is no shame in that because he always gets help from others. There is a bond between them because of their similar experiences. She is a badass, just like he is.

EC: What about your next books?

MG: The “Gray Man” book will be out around this time next year and will take place in the U.S., Croatia, and Spain. There will also be a book out in July that I co-authored with an active duty Marine lieutenant colonel. Titled “Red Metal,” the plot has the Russians invading Poland as they head toward Germany. To save the day a Marine lieutenant colonel works with the French Special Forces and a young female Polish partisan fighter.