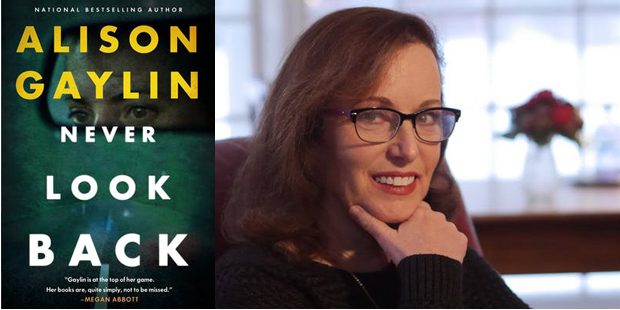 Never Look Back by Alison Gaylin is a suspenseful psychological thriller.  Her readers will not be disappointed with this latest novel based on a true murder crime spree.

The plot delves into how, in 1976, teenage murderers April Cooper and Gabriel LeRoy terrorized Southern California’s Inland Empire, killing a dozen victims before perishing in a fire.  More than forty years later, a True Crime podcast gets an unexpected tip that April did not die in the fire and is living in New York under a new identity. Hoping to find definitive proof that Renee Bloom is really April Cooper, Quentin, who has the podcast, journeys to New York and reaches out to Renee’s daughter, movie columnist Robin Diamond.

“I always wanted to write about this couple, Charles Starkweather and Caril Ann Fugate that went on a killing spree, which started in Nebraska. She was fourteen and he was nineteen. Even though it seemed obvious he abducted her, she was tried as an accessory to murder and sentenced to life in prison, since they were boyfriend/girlfriend. Eventually she was let out. I did create a similar murder spree set in the 1970s.  But April is a little less of a victim and more of a survivor.  The story came together for me when I thought, ‘what if that was me or my mother.’ I did not make it a straight up kidnapping like what happened with Patty Hearst.  Remember, April knew her abductor from the very beginning.”

Quentin Garrison blames his troubled upbringing on the murders. His aunt was one of the victims and he wants closure for himself and other families who are still impacted by the murders. Quentin and Robin each conduct their own investigations, determined to get to the truth. But in doing so, will they place their own lives in danger?

Hopefully readers understand that this is a book about families. They can be nurturing and destructive at the same time.  Everyone has a family.  Some are made from friends, and some are actual families.  They range from dysfunctional to unconditional love.  We forgive a lot that we would not in other relationships.  I think in this story Quentin had a dysfunctional mother, while Robin’s mother gave her unconditional love. I realized as I was writing this story that our parents had a whole other life, many fully mature adults, before we came into existence.  They could have had moments of great shame, regret, or nobility that we might never know about it unless they choose to tell us.  What we know about our parents’ past is through their own perceptions.  What I wanted to explore in this book is that we never fully know anyone else.”

This intense thriller took readers on a roller coast ride with all the twists and turns. Written from multiple points of view they get an overall impression of each character.  An added bonus was the letters written by April to her future child explaining her feelings and thought process.