The 41st Annual San Diego Crew Classic is set for April 5 and 6 on Crown Point Shores on Mission Bay will feature many elite collegiate crews at the 2014 event as the premier regatta celebrates over four decades of rowing excellence.

Winning crews in 2013 for these two coveted collegiate trophies were California in the Copley Cup (men) for their 12th overall; and USC, who took the Jessop-Whittier Cup (women) for their third straight win and fifth title since 2007.

Approximately 4,400 athletes from more than 125 universities, clubs and high schools from across the United States, as well as the world, participate in this legendary, premier spring regatta. Athletes, ranging in age from 14 to 84 years, compete in more than 100 races in various divisions.

Tickets for the 2014 San Diego Crew Classic can be ordered in advance at crewclassic.org. Admission is free for active military with ID and for children under 12 years of age.

Back by popular demand, the San Diego Bicycle Coalition proudly announces its second-ever CicloSDias in the streets of Pacific Beach on Sunday, March 30. The open streets celebration gives communities a break from the stress of car traffic, promotes local business and establishes San Diego as a commuter-friendly city that embraces all forms of transportation. CicloSDias invites all family members (including four-legged ones) to spend the day riding, walking, strolling and skipping though one of the city’s most popular destinations, Pacific Beach. From 10 a.m. to 3 p.m. a few miles of north Pacific Beach will become streets free of automobiles and newly transformed into a space for the community to play.

As the date approaches, more specific information will be available. In the meantime, roll with CicloSDias at www.ciclosdias.com.

Experience San Diego from the top of the Coronado Bay Bridge on foot! The Navy’s 28th Bridge Run/Walk presented by SDG&E and Northrop Grumman takes place Sunday, May 18 at 8 am. This event offers the ONLY opportunity to cross the Coronado Bridge on foot in 2014! The run/walk is capped at 11,000 participants. Registration is now available at www.navylifesw.com/bridgerun.
For more information, visit www.navylifesw.com/bridgerun or call (619) 556-7455.

Event organizers are offering a military discount for the Saturday, April 5 event at Seal Beach Community Center, 151 Marina Drive, Seal Beach, CA 90740. Log on to www.RunSealBeach.com for more info and your discount.

Stitches from the Heart and Paralyzed Veterans of America, Cal-Diego chapter is proud to announce the Inaugural Stitch-Run-Roll 5K. The event will be held on Saturday, April 26 at 8 a.m. at Carlsbad Road Runner Sports Store, 5617 Paseo Del Norte in Carlsbad. Check in will start at 7 a.m.; starting gun at 8 a.m. 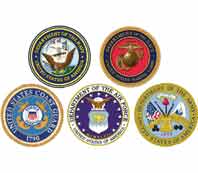 Stitch-Run-Roll 5K is organized to help babies born into crisis, veterans with spinal cord injury or dysfunction and their families within the community at large.

Traveling to Vista by bicycle just got easier, but if you’re looking for a traditional bike rack in Vista’s downtown Vista village, you won’t find one. As part of its beautification efforts for the downtown area, the Vista Village Business Association (VVBA) contracted local artists to create four unique bike racks.