Phil’s Big BBQ at the Ballpark 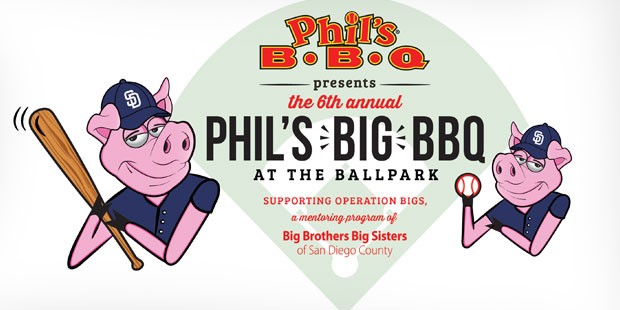 Hoo-rah for Phil’s BBQ who will fire up their grills to benefit San Diego’s military community once again. Phil’s will host its 6th Annual Phil’s Big BBQ at the Ballpark on Monday, August 11 to benefit the Big Brothers Big Sisters of San Diego County (BBBS of SDC) military mentoring program, Operation Bigs, which is celebrating its 10th year in service. In honor of the landmark anniversary, the restaurant is aiming to raise a record-breaking $100,000 for the charity. People who attend Phil’s Big BBQ will enjoy Phil’s mesquite-grilled ribs and chicken, two sides, a blended beverage from Dlush, children’s activities, a photo booth, live music and more. There will also be a beer garden, sponsored by Ballast Point and Karl Strauss, for 21+ guests. 100% of all ticket sales go directly to the charity.

Ten years ago, Big Brothers Big Sisters of San Diego County (BBBS of SDC) was receiving an ever-increasing number of phone calls from Camp Pendleton families looking for outside support for children whose parents were on deployment. “Operation Bigs is the first program of its kind, offering one-to-one mentoring to provide an extra layer of support for military families and children,” said Deborah Condon, CEO and President of BBBS of SDC. “We are proud to provide our local military families with a unique resource for their children. A Big Brother or Big Sister is a stabilizing force for both the child and family during times of stress and uncertainty.”

Today, Operation Bigs operates at nine sites throughout the San Diego region, with a goal to serve 250 children in 2014. The program has served more than 1,300 children since its inception, and has inspired the expansion of more than 30 similar programs across the nation. Volunteers, children and parents who have participated in the program have identified the mentorship relationship as the single most significant component that helped the family cope with deployment.

“In throwing the event every year, my staff gets to see the direct impact of the Operation Bigs program and how special the bond is between the Bigs and Littles,” said Phil’s BBQ owner, Phil Pace. “We work really hard to make this a great event for all who attend and hope others are just as excited as we are to help give back to the military community and families in San Diego.” More than 100 of Phil’s BBQ employees will volunteer their time cooking up Phil’s famous mesquite-grilled ribs and chicken, served with Phil’s homemade potato salad, macaroni salad and coleslaw. (In addition to employee volunteer time, Phil’s BBQ also donates all food costs.)

Phil’s Big BBQ at the Ballpark will take place from 4:30 – 7 p.m. leading up to the Padres vs. Rockies game in Petco Tailgate Park, located at the corner of 14th and Imperial. The regular $25 admission price includes a Phil’s BBQ meal, Coca-Cola beverage, a blended beverage from Dlush, a ticket to the 7:10 p.m. Padres game, and access to the Kid Ventures Kids’ Zone and Pixster photo booth. VIP tickets can be purchased for $50 and include all of the above, plus two 12 oz. beers and preferential line treatment and reserved seating. The first 150 VIP guests will also receive field-plaza seats at the game.

Title sponsors for the event include the San Diego Padres, Frank Scion, Torrey Pines Bank and Alliance Group Real Estate Services, who will donate a portion of all proceeds from July and August commissions to the charitable event. Tickets can be purchased at any of the Phil’s BBQ locations, or online at www.philsbbq.net and www.SDBigs.org/PhilsBigBBQ. Season tickets holders can purchase a ‘meal only’ ticket for $20, or a ‘meal only’ VIP ticket for $45. Tickets are available on a first come, first served basis. 100% of ticket sales go directly to Operation Bigs. For further information on Big Brothers Big Sisters Operation Bigs, visit www.SDBigs.org/OperationBigs.

About Operation Bigs
Big Brothers Big Sisters of San Diego County’s Operation Bigs is a one-to-one mentoring program for military children, the first of its kind in the nation.  Mentoring provides an extra layer of support to local military families. The military lifestyle often presents many challenges for children and families such as frequent relocation, school transitions, separation from extended family, increased responsibility coupled with a sense of loss when a parent deploys and the physical and psychological stress faced when a parent returns from war.  San Diego is the single largest military installation in the world, home to hundreds of thousands of service members, veterans and their families. Since BBBS of SDC launched Operation Bigs in 2004, it has served more than 1,300 Navy and Marine Corps children at 9 sites throughout San Diego County and has served as a model for more than 30 BBBS military mentoring programs across the country. The need for caring, committed mentors to support the children of those who defend our country remains urgent.