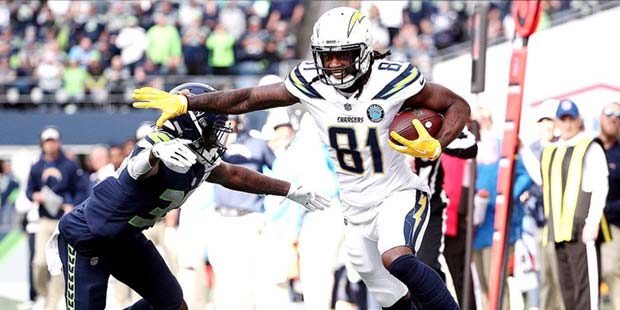 Mike Williams’ journey to the NFL was a scary one. Suffering a neck injury during the opening game of his junior year at Clemson, his life flashed before his eyes when he faced the possibility of not only ever playing football again, but maybe not even being able to walk. Fortunately for Williams, x-rays on his neck revealed only a slight fracture — one that didn’t require surgery and would heal over time.

Ranked one of the top receivers entering the 2017 NFL Draft, Williams’ dreams came true when the Chargers selected him No. 7 overall in the first round. MP reporter Art Garcia Jr. caught up with Williams to ask him a few questions following the Chargers victory over the Tennessee Titans in London.

Art Garcia Jr.: What are your thoughts on the season so far?

Mike Williams: I think it’s going pretty good — we’re sitting here at 5-2, and I don’t think we can be in a better position right now. We lost to two great teams (Chiefs and Rams), but we continue to come out here everyday and fight to get better and we’re looking to get our record to 6-2 this weekend.

AG: After missing most of your rookie season last year, how do you feel about your production this year?

MW: I’m making some pretty good plays when my name is called. My main goal is to get better every week and to do anything I can to help the team get a win. Whether it’s blocking in the running game or making a play in the passing game, I’ll do whatever it takes to help get my team a win.

AG: Aside from your health, what has been the biggest difference for you between your rookie season and this year?

MW: The biggest difference for me is just being out there (on the field). The team brought me here to make plays, so just getting the opportunity to play the game that I love I’m making the most of the opportunities.

AG: You were ranked one of the top three receivers entering the 2017 NFL Draft, did you have any idea the Chargers were interested in you?

MW: No, because I didn’t have any contact with the Chargers in any of the pre draft activities, so it was pretty shocking when I got the call.

AG: You were picked No. 7 overall in the draft. Did that surprise you or is that about where you expected to be selected?

MW: Yeah, I just wanted to be with a team that wanted me, a team that believed in me and that I could get the job done. So whether it be (pick) seven or 20 something, it didn’t really matter because I got the opportunity to play the game I love in a great city, so I’m just thankful for that.

AG: With all the high expectations on you last year for being a first round pick, how hard was it on you to miss most of the season because of an injury?

MW: It was tough sitting out because I wasn’t able to show what I was capable of doing because of the injury. Being a first-round pick I had expectations for myself to come out here and make a lot of plays, but the back injury set me back a little bit. But now I feel a lot more healthy, and I’m showing everybody what I’m capable of doing by making plays out there.

AG: Did you put any pressure on yourself or did you feel any outside pressure to prove you were worth being the seventh pick in the draft?

AG: How did it feel to finally get your first touchdown reception in the NFL after all you had been through?

MW: Yeah, it was against Buffalo on a post route in the end zone where we got the look that we had been talking about all week in practice, and he (Philip Rivers) put the ball up where I could get it and I made a great catch.

AG: I can’t imagine the feelings you had after catching your first touchdown pass and realizing all your hard work over the years finally paid off. Your thoughts?

MW: It felt good. There was some contact and I made it between two defenders, so that felt good to show I can make catches in tight situations. The main thing was getting that first one, so now that it was out of the way all the rest of the touchdown passes would become kind of routine.

AG: Last question, while at Clemson you played at Memorial Stadium which seats some 81,500 fans — the 16th largest seating capacity in college football. Is it tough to go from playing in front of massive crowd to now playing in front of a much smaller crowd at the Stub Hub Center where the majority of the seats so far have been filled by fans of your opponents?

MW: It isn’t tough, it’s just different when you’re coming to the stadium and notice your opponents have more fans than you do, but that’s going to change once we start winning because everyone always hops on the bandwagon. So that’s going change and we just need to go out there and take control of the things we can control — we can’t control who shows up out there in the stands, we can only control what we do out on the field.

Oh what a difference a year makes. Per the NFL Network, the Chargers have made significant improvements over the past year. Through the first nine games, the team has a better W-L record: 7-2 versus 3-6; a higher PPG average: 26.7 versus 18.6 and a higher turnover differential:

The Endzone: Williams’ neck injury occurred when a shove from a defensive back pushed him into a collision with the bottom of the field goal post. The four-yard touchdown catch was his second reception of the season and turned out to be his last catch of the 2015 season. Entering week 11, the Chargers are riding a six-game winning streak and currently have the third-best record in the AFC at 7-2. The team ranks 8th in total offense, 7th in rushing and 13th in passing. Defensively, the team ranks 14th in total defense and 17th against the run and pass, respectively.