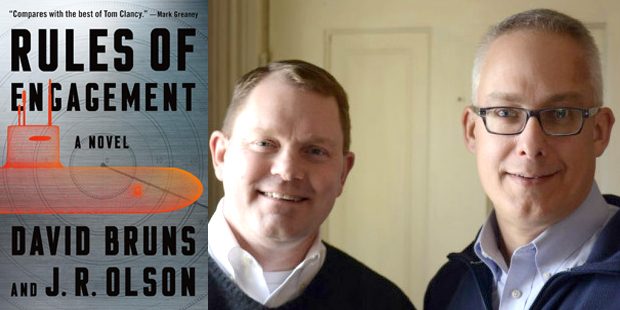 Rules of Engagement by David Bruns and J. R. Olson brings to the forefront the real threat of cyber warfare in this military thriller.  Both authors use their past experiences as naval officers to bring a wealth of accuracy and realism to the story, which only serves to heighten its authenticity.  Bruns is a former submarine officer who left the business world behind to write sci-fi novels.  Olson spent more than 20 years in the Navy, retiring as a commander, and now teaches college courses in Intelligence/Counter-Terrorism.

This tale of clear and present danger forewarns how cyberwarfare is the next battleground that can play out on the world stage.  Although some military thrillers can sometimes be bogged down in the details, this one has just the right balance between information given, plot development, and action.

As in real life, Russia is in the midst of the trouble making.  A criminal enterprise known as Bratva is losing money on its arms dealing business, so its leadership hires a North Korean go between to create havoc.  Rafiq Roshed, one of the world’s most wanted cyber terrorists, now residing in North Korea, is enlisted to pit China, Japan, and America. the nations with the three most powerful navies, on a collision course for World War III. He inserts a computer virus into a country’s command system to gain control and has it begin to learn how to carry on its own warfare. First penetrating the Chinese, he has their war machine launch a series of attacks on the U.S. Pacific forces. As China and Japan are losing control of their military, the U.S. is also in danger of doing the same. Casualties are mounting, and an apocalypse is looming large.  The only way to stop this disaster from creating further trouble is to stop it at its source.

This plot driven military thriller does not have a single hero, but realistically shows how a team working together can complete the mission. Midshipmen Michael Goodwin, Janet Everett, and Andrea Ramirez are asked to find and eliminate the source before it is too late. Working collectively, they must connect the dots to find and destroy the deadly virus and its handler, Roshed.

Readers are left with an unsettling feeling after reading this story. It heightens a frightening wake-up call.  Fans of military thrillers will delve into the intrigue and heart pounding action of this novel. It has plenty of clever twists, strategic moves, and high stakes.

Elise Cooper:  Why did you both decide to team up?

J. R. Olson:  As Naval Academy graduates, we attend Alumni Association events. In 2011 we were invited to speak to the Naval Academy parents.  One of them said, ‘you two should get together to write a book.’  We did just that five years ago.

EC:  What inspired you?

David Bruns:  In July 1984, just after the Hunt For Red October had come out, I had a chance to meet Tom Clancy before he became super famous.  In reading his book my world was changed.  Being a midshipmen in the US Naval Academy I decided to become a submarine sailor.  I spent six years as a commissioned officer in the nuclear-powered submarine force chasing the Russians in the frigid waters of the North Atlantic. I thought how the Clancy book affected me, the movie “Top Gun” affected many who went on to become Navy pilots, and what Tom Wolfe’s book The Right Stuff did for astronauts. We are hoping this book might do the same for the next generation of Cyber Warriors.  Maybe inspire the next generation to join the service and serve their country.

EC:  Cyber warfare does not seem to be on the public’s radar?

DB:  We wanted to write a book identifying and developing a story around the threats of the 21st Century.  We are hoping to take a threat not talked about publicly and dial it up to an ’11.’

JRO:  We were driven to write about cyber security.  The Naval Academy actually has a new facility called Hopper Hall that houses the cyber security program.  The midshipmen majoring in it will be able to study it from a national security perspective.  The heroes of our story are the team of three midshipmen.

EC:  This is the third book of the series?

DB:  The first two books were self-published.  For book three, and going forward, we decided to get an agent and publisher.

JRO:  The first book, Weapons of Mass Deception, is about nuclear proliferation with non-state actors.  The second book, Jihadi Apprentice, delves into home grown radicalization.  This book highlights how a cyber threat can be used as a tool by a rogue actor working inside a nation state.

EC:  There are many ways of using cyber as a weapon?

JRO:  There are a lot of systems connected all over the world.  With this plot we played off of SCADA: Supervisory control and data acquisition is a system of software and hardware elements that allows industrial organizations to have a centralized control.  A great example was the Stuxnet Worm. It penetrated inside the Iranian centrifuges and locked on the central panel.  Everyone observing thought it was functioning normally, but what was actually happening is that the centrifuges were coming apart.  Similarly, the electrical power grids are also system of systems that can be vulnerable to a cyber-attack.

DB:  Other examples are the hacking of the Democratic Committee through spear phishing where someone clicked on a link they should not have.  There is also Target and Sony where a hacker was able to gain access to many people’s information.

EC:  Does cyber warfare have any fingerprint?

DB:  This is an issue because no one can tell who it is right away.  A code has to be taken apart. It takes awhile to be absolutely certain.  It is an issue of attribution.  How do we tell what constitutes a cyber-attack that should lead to war?

EC:  Besides an entertaining story what was your goal in writing this story?

DB: There is a certain level of expectation from the reader that they will get a plausible explanation.  We wanted to make it realistic and interesting without bogging it down in the details.  I have the benefit of a son who is a computer science major so I can run by him bits of information.  We did not want to write a Skynet book like Terminator that takes over the world.  The threat we wrote about is man-made.

JRO:  The ability for computers to make decisions is far greater than any human being.  In the future, this whole cyber arena may be computers fighting other computers. Although we made up “Happy Panda” and “Trident” we wanted to make sure that we created realistic systems with plausible vehicles.

DB:  The threat will be from biological agents used as weapons.  The three Midshipmen are back, but now will be junior officers.  One of our characters from the previous books, FBI Special Agent Elizabeth (Liz) Soroush may have an important role.