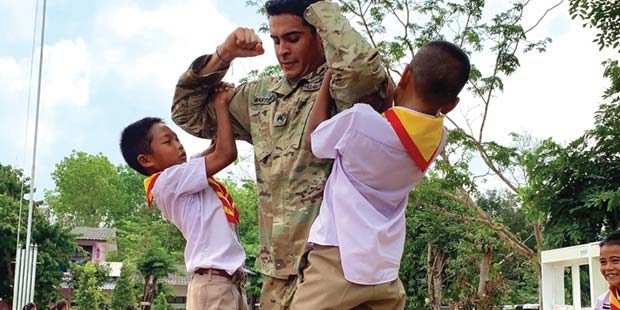 Martinez is here to build relationships with the community, but he didn’t expect to make a few friends along the way.

Martinez, a U.S. military civil affairs non-commissioned officer assigned to the 416th Civil Affairs Battalion (Airborne) in San Diego, is participating in Cobra Gold 19, a Thai-U.S. co-sponsored exercise that represents the longstanding friendship in the region between the Thai and American people.

A native of San Diego, Martinez has traveled more than 8,000 miles to participate in this exercise. His team is spending one month in Thailand meeting with local officials, educators and visiting key infrastructure sites.

“We are here to build community relations between the United States and the Thai people,” Martinez said. “My team is overseeing a site project where Navy Seabees are building more class-rooms for a school.”

For many of the Thai students, Cobra Gold was the first time they have met with Americans in the military. Natthawut Deeman, a 13-year-old seventh grader at the school explained that he didn’t know that American service members did projects like building schools in other countries.

Fourteen-year-old Kanyanut Tantod lives less than a kilometer from the school and wants to be a nurse when she grows up. Tantod met U.S. service members prior to the exercise while they were conducting the initial site surveys.

“They are so kind and generous,” Tantod said. “I’m excited and grateful for the military to be here and build this.”

Martinez says it is these kinds of projects that encouraged him to join the Army Reserve and pursue a career in civil affairs.

In his civilian job, Martinez is an emergency medical technician, but he says the skill set he uses in his civilian career directly enhances his job in the military.

“In a nutshell you’re a caretaker, you’re nurturing, you’re helping people,” he explained.

In a few weeks, Martinez will return home with the other soldiers from his unit. They won’t work together in uniform for another month, but he says he’ll never forget the lessons he learned in Thailand and the contributions he believes his team has made.

“You definitely get that warm and fuzzy when you see a little kid looking up to you and saying ‘pick me up,’” he said. “You would look at it like they may not have much in comparison to the United States, but they would give you the shirt off their back.”