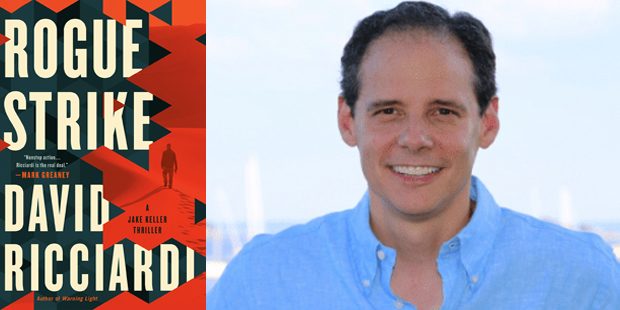 Rogue Strike by David Ricciardi is relevant to the headlines.  Many of today’s current events, written about a year ago are coming true in the real world.  After reading this suspenseful novel, readers will understand the context of what is happening today.

This second book in the series has CIA analyst Zac Miller given an alias of Jake Keller.  With some training and field experience he has become a hardened, more experienced field operative.  Now working for the CIA’s Special Activities Center, alongside Special Ops Marine Corps Veteran, Curt Roach, their mission is to intercept a clandestine meet of some high value terrorist targets. Sending a drone on a kill mission everything goes sour with the drone not responding and the comms down. Realizing that someone has electronically seized control of the Hellfire missiles they watch in horror as it diverts to Saudi Arabia and drops its payload on a couple of thousand worshippers in the city of Mecca, Islam’s holiest city. The chief of Special Activities, Ted Graves, and other government officials try to pin the blame on Keller and Roach, saying the agents have gone rogue. The action never stops as Keller is determined to clear his name and find out what really happened. To add bad to worse, while America tries to come to grips with what happened in Mecca, the United States is attacked on multiple fronts at home.

“The Special Activities Center really exists.  There is a group predominately of ex Special Forces military personnel: Marines, Delta Force, and SEALs.  Guys in their forties who want to protect America.  Some of them were the first into Afghanistan right after September 11th.  They are part diplomat and part soldier who are given a lot of autonomy.”

This very entertaining story has the added bonus that a lot of what was written has actually come true.  Anyone following the news will understand how a drone is used by Iran to challenge the US, and that B-52 bombers are put in a holding pattern as part of a reprisal plan.

“In doing the research I went to the Northern part of Jordan to do some research for this book.  Ten miles from the Syrian border are Roman ruins called Jarash.  Libya also has Roman ruins.  Because I did not go to Libya I used what I saw in Jordan.  As I went through stone passageways and steep steps I thought this would be a great setting for the dramatic climatic ending.”

Something close to my heart is The Fallen Patriots project.  I also wrote about it in the first book.  They provide counseling and tuition assistance for the children of service members who died in the line of duty.  My friend started this charity, which has gown spectacularly.  My wife and I supported it for a long time. I give a fixed percentage of my royalties. I hope to inspire and encourage people to contribute.  They also give the children encouragement, guidance, and tough love where necessary.”

Ricciardi is two-for-two with thrilling stories.  It has over the top action, a conspiracy between rogue individuals, and many twists.