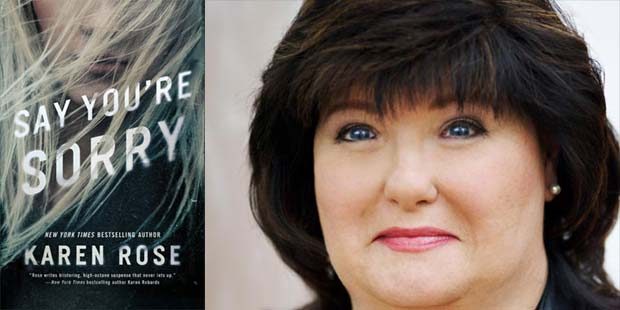 “Say You’re Sorry” by Karen Rose will keep readers guessing and thinking. It has thrills, suspense, psychological analyses and a bit of romance. People are kept at the edge of their seats by a story that delves into intense subjects such as cults, pedophiles, torture, abuse, alcohol dependency, anxiety attacks and PTSD.

“I enjoyed writing the scenes with the dogs,” Rose said. “Brutus is a therapy dog. I got a lot of the ideas from one of my editors that trains therapy dogs. I wrote the scenes with Brutus because I want readers to understand what a true service dog does. Daisy has her dog to help her with anxiety and keep it under control so it doesn’t become a threat to her sobriety. We are even giving away some stuffed Brutus’ at the conferences. I am losing my hearing so I am looking for a service dog of my own. Hopefully, one like Brutus. My younger daughter is deaf and her anxiety comes from her disability. Recently, she was followed, which scared her and me. It is nerve racking that as a deaf person anyone can sneak up to her at any time. We have been talking about getting her a service dog as well.”

Although the first novel in a new series, it draws on characters from the Baltimore series. The heroine, Daisy Dawson, should be recognizable to those readers who have read Rose in the past. She is a cross-over character whose story is told front and center in this debut. Having moved to Sacramento she is confronted by a disguised gunman who pulls her into an alley. Instead of fleeing she uses the skills taught by her dad. As the attacker bolts, Daisy pulls a locket off his neck. A good friend, Sacramento PD Detective Rafe Sokolov, comes to her rescue and brings his old friend, FBI Special Agent Gideon Reynolds. After doing some investigating it becomes clear this attacker is actually a serial killer who preys on young women. Knowing she needs a defender, Reynolds is asked to be a part of her protection detail. For him it is personal, since he recognized the locket’s significance. The cult forces teenage women to wear these lockets after marrying them young. Together Daisy and Gabriel are determined to stop this vicious killer and find the cult he escaped from.

“This is a serial killer who has been hanging around in my head for about five years. He is a person that is capable of monstrous deeds. To make a villain believable they must not be cardboard cutouts like Snidely Whiplash who just twirls his mustache and goes wah-ha-ha. They have to have a vulnerability, something they care about. This killer had a messed-up childhood. I wanted to explore why others like the hero Gideon who has a horrific childhood do not become killers. I am fascinated why some do and some do not. I have to tell you a funny story. I met a man on an airplane who is a private pilot that combined charter services and corporation time shares. As he talked about all these places he visited in such a short period of time I looked at him and said, ‘you would make a perfect serial killer because there is no pattern.’ He looked at me and became very upset. I told him I write thriller novels, but he still did not speak with me the rest of the flight.”

Both the hero and heroine are mending from emotional problems. She is a recovering alcoholic that has anxiety, while he wrestles with his memories of the cult’s abuse. Daisy was forced to live a sheltered and isolated life by her father who believed her sister, Taylor was being hunted. Daisy must come to grips with her father for uprooting their lives. She gravitates towards Gideon because he too is trying to come to grips with his past. When he was a young child, his mother got involved with a cult that advocated forced marriages as soon as a young girl turned twelve and welded a locket around her neck which claimed ownership of her. Boys at thirteen were considered men and began apprenticeships which also included pedophilia. Gideon was nearly beaten to death after he objected and killed the man who was trying to rape him. He barely escaped with his life.

Although this book is 600+ pages, there are a lot of moving parts from start to finish. Yet, it’s an amazingly fast read given the size of the book, since these pages are jam-packed with wall-to-wall action and heart-stopping, page-turning suspense. Say You’re Sorry is something Karen Rose will not have to do with this debut novel of her new series, because she has written a riveting and thrilling novel.