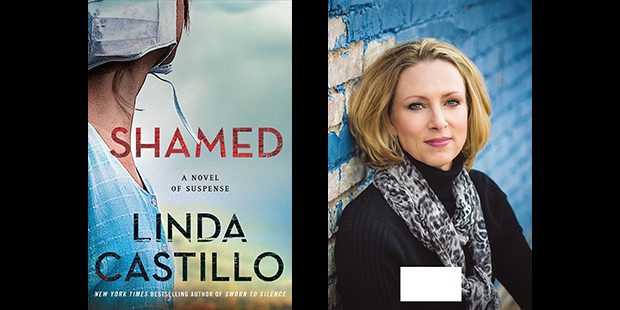 Shamed by Linda Castillo brings to life the Amish community in this suspenseful murder mystery. The author explores the secrets and lies within this group, but also shows how the community is very open-minded to those with handicaps.

The story opens with a brutal murder of an Amish grandmother. Her granddaughter, a special needs little girl, has been kidnapped with the younger sister a witness to everything. Police Chief Kate Burkholder is called in to investigate.  She has insights into this tight-knit closed community because she is a former Amish, having left the community as a teenager.

The author notes that “distrust is one of the themes.  Another thematic element I found myself returning to again and again as I wrote the book is “shame.”  Most of us know that the Amish are a Christian based religious culture.  They embrace tradition and social order and a set of rules known as “Ordnung” as set forth by their leaders.  They embrace marriage and children.  Most believe in separation from the rest of the world.  As Anabaptists, they believe in adult baptism.  Yes, the Amish are a religious society.  They are good neighbors, and they are good friends.  All of that said, they are human, too, and as we all know, human beings have frailties and weaknesses.  Those are some of the core elements that drew me to the “shamed” theme of this novel.”

Readers experience the emotions with the characters as Kate is in a race against time to find the killer.  She must battle an old Amish order that believes family is everything and tradition is upheld with an iron fist. As the killer is claiming more victims, Castillo skillfully adds to the tension by having at the beginning of each chapter the number of hours the child is missing. Everyone knows that the chances of recovering her alive diminish rapidly with the passing of time. There are serious secrets at work and Kate has to discover the truth in order to save the girl and find the killer.

The missing child is a huge element of the book.  “I can only imagine how agonizing it is for parents and loved ones of that child.  Law enforcement, too.  Stranger kidnappings are rare and dangerous.  The statistics are horrifying.  The longer the child is missing, the more likely a negative outcome.  As a writer, I wanted to explore that dark journey through the eyes not only of Kate Burkholder and her cohorts, but the parents and Amish community as well.  I wanted the reader to feel every tick of the clock with the same anxiousness and terror as Kate and the parents.”

This is a riveting story that readers will be unable to put down.  As with all her books, Castillo never seems to disappoint.