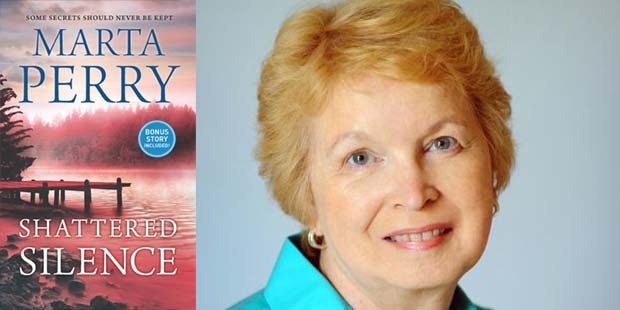 “Shattered Silence” by Marta Perry flawlessly intertwines a mystery with contemporary themes, while giving a sprinkling of the Amish culture. She illuminates the differences between the Amish community and the larger urban society.

“I wanted to write something that would dramatize the modern life of the character against the quiet secluded farm life,” Perry said. “I have always lived in areas where there are Amish. Readers enjoy it because they can react to the complexity of their modern life. They enjoy reading about those who live in the contemporary world but have a much simpler life. I have spoken with some Amish who say, ‘If you like our reliance on family, rely on yours or build one; if you like the fact we are interconnected within our community, do it in your community.’ I think many wish they had the simpler existence, similar to when they were growing up.”

The plot begins with new divorcee Rachel Hartline attempting to touch base with her ex-husband, Paul, to discuss putting their home up for sale. After catching him trying to download some sensitive company information, things go very awry for her.

First, she must deal with Paul’s disappearance, and then a private investigator, Clint Mordan, hired by the CEO to locate the flash drive, suspects her of being a likely participant in her husband’s scheme. After having her house broken into, turned upside down and having her life threatened, she decides to seek the haven of her grandparents.

They are Amish and Rachel knows she will be safe with them. As Clint follows Rachel from Philadelphia to the tiny Amish community of Echo Falls, Pennsylvania, he figures out that whatever loyalty Rachel might still feel, it doesn’t include lying or covering up for her ex-husband. As he and his partner hit dead ends he wonders why their client is keeping them in the dark and becomes more protective of Rachel. As they begin to trust each other, both realize that there are few people they can trust to ensure Rachel does not become a murder victim.

Because of her past experiences, Rachel has trust issues. Outwardly she tries to give an air of independence, but deep down she is very vulnerable. She has been let down by the ones who should love and care for her the most. Rachel is loyal, resilient, considerate and a generous person. These traits she learned during her summers at the Amish farm with her grandparents, where her former Amish mother would send her.

“I wrote Rachel’s profession as a Kindergarten teacher, and I based her on some of the wonderful, kind ones I knew,” the author said. “As a traditionalist, she is devastated by the fact that she couldn’t make her marriage work, always thinking she would marry for life. Those people in her life that are close to her let her down, a big element in the formation of her personality. Although conscientious she has trust issues, including trusting her own instincts. I do not think she is as independent as she assumes. For instance, when she realizes she is in trouble and needs help she doesn’t flee to the nearest big city where she can disappear, but goes back to what represents home to her, the Amish community, seeking security and safety.”

Clint compliments Rachel. At first, he seemed like a cold, calculated, and tough man, someone goal oriented with no sympathy. Yet, Rachel’s Amish family recognizes that beneath that hard exterior is a considerate, kind, gentle, and fiercely protective hero.

“He is motivated by a sense of duty,” Perry said. “He is a very righteous person who believes in duty first and honor above all. Unlike Rachel, he was raised in a very secure and stable environment. Clint is haunted by the fact he felt he let his police partner down and is determined that now as a private investigator it will not happen again to Rachel. He would not talk about this issue because he is uncomfortable talking about his feelings, forcing Rachel to develop a shorthand to figure out what is going on with his emotions.”

Perry does a great job of balancing the family element within a suspenseful plot, which has moments of fear, dread, and tension. Once the first page is turned readers will be hooked, as they must navigate all the different twists thrown at them.