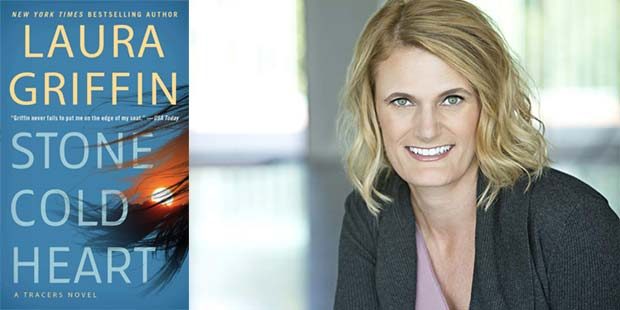 “Stone Cold Heart” by Laura Griffin brings suspense to the forefront, sprinkled with some romance. The Tracer series shows the different aspects of CSI investigators, where each book highlights the approach to solving a crime.

“I have been fascinated by this field for a number of years,” Griffin said. “I have read a lot of books and interviewed those in the field. The inspiration is a research center in Central Texas that helped me to come up with the fictional Delphi Center Forensic Lab. The heroine, Sara, is a bone expert that can identify the type of bone and then uses it to unravel the murder. Her field is somewhat like an archeologist, but with a crime solving twist. She gets called in when bones are found, or the decomposition of the body is so advanced that identification cannot happen. They can identify the difference between human and animal bones. They can also use the bones to see if the cause of death was violent or from natural causes.”

Sara Lockhart is a forensic anthropologist with the Delphi Crime Center in Texas. She is called in after human bones are found in a park by police detective Nolan Hess. He wonders if these are the bones of a local teenage climber who vanished a year ago. The mystery ratchets up when more remains are found. After more bones are discovered, Sara and Nolan race against time to find the serial killer before he abducts, tortures and kills more young women.

“I wrote Sara as someone committed and smart, much like her father. He was in the Coast Guard and like him, she has a mission to bring closure to families whose loved ones are missing. This story starts out with hikers discovering bones in a gorge. Sara is trying to provide answers for this family because they are unable to grieve and are stuck in this limbo. I wrote this book quote, ‘(Sara) couldn’t imagine the nightmare of having a child disappear and going without answers for many months or years. The discovery of bones was reason to hope.’ She can be headstrong, pretty, assertive professionally, a science expert, thorough, dedicated, and empathetic.”

During the investigation, Sara and Nolan become attracted to each other. Nolan is a workaholic who is well-known for his integrity and his compassion. As a detective, he has great insight and judgment. While Sara has turned into a loner, wanting nothing more than to solve cases. She is strong, independent, and a workaholic that tries to avoid relationships. Although intelligent, spunky, dedicated, and willing to forge her own career path, she is the direct opposite when it comes to getting close to someone.

Readers will be on the edge of their seats as the mystery unravels. The search to find the serial killer is riveting and as an added bonus Griffin develops an intriguing connection between Sara and Nolan.