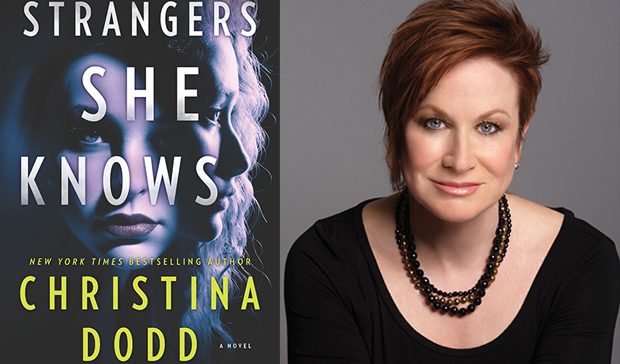 Strangers She Knows by Christina Dodd creates an atmosphere of suspense and tension, that will keep readers on the edge of their seats.  This story never lets up from beginning to end.

A fabulous book quote, “You are referring to ‘If a book isn’t read, it cries in its soul.’  Once a book is read there is more to it than just a cover with a story inside.  After reading it people’s imagination can go wild and they can put their own imprint on it.  What means the most to me is when readers find something that affects them personally.  For example, I was told how my stories kept them company as their mom was in hospice, or how they were touched by the story.  I also had in the story another type of book, a diary.  Unfortunately, they are something of the past.  But readers hopefully saw how books can be a form of entertainment when there is no technology. I think the story of “Beauty and The Beast” is enduring to children, especially that scene when Belle enters the library. It was such a beautiful scene, full of books.”

A psychopath, Mara Phillips, has a vendetta against the main character, Kellen Rae. She has escaped a maximum-security facility for the criminally insane. This psychopath targeted Kellen, her husband Max, and their daughter Rae who still has a maturity level beyond her years. Hoping that authorities will re-capture her, the family decides to stay on an island off the Northern California coast. There is no cell phone service, WiFi, internet, and TV, basically having the family totally cut off except for the radio in the helicopter. To pass the time Kellen and Rae explore the many hidden rooms and tunnels throughout the house. One of the main discoveries is a diary from the WWII years of a young girl whose father was the original owner of the Hearst-like home. As they read it, Kellen, Rae, and Max find out that the father was abusive, and that the writer’s lover died in the war. They also are kept busy by repairing and restoring a 1955 Ford-100 pickup truck.

But, since seeing Mara at her wedding, Kellen knows she and her family are in danger. She is also recovering from brain surgery that removed a bullet from her brain, and now is trying to regain the use of her atrophied hand. Unfortunately, Kellen will also have to battle Mara in a fight to see who will live and who will die.

Dodd noted, “My brother-in-law had a non-malignant tumor on his brain.  The part affected was how he controlled his foot.  Everything I wrote about was similar to his experience.  He did not quite get his foot working, while I wrote Kellen having problems with her hand. I wanted to give her another level of difficulty and something she needs to overcome.”

This book is a fast-paced and a riveting read. Readers are kept guessing about the outcome. People will be sad knowing that the story of this family has come to an end.