Surf City Marathon One of America’s Most Popular

The largest combined oceanfront marathon and half marathon event in California – the Surf City USA Marathon and Half Marathon – will kick off Super Bowl Sunday in a big way in Huntington Beach.

Since 2010, the race has attracted 20,000 participants and 45,000 spectators from all 50 states. Some 1,000 cities and 18 foreign countries have been represented. The race is known for its great course, fast times, fantastic weather, award-winning surfboard medals, and fabulous event execution. 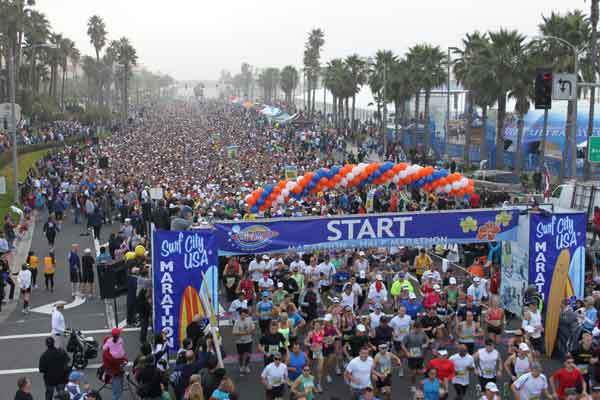 Led by Kinane Events, the race management team is made up of over 80 members of the running community, who love the challenge of creating an extraordinary experience for the friends, family, running club members and visitors to Huntington Beach and Southern California. Over 50 percent of the management team has been spending weekends together setting up, cheering and picking up after thousands of runners for over 15 years. Most of the crew started out volunteering at water stations or handing out t-shirts. Now they recruit bands, design photo ops for the participants, recruit expo booths, and create marketing videos.

“Having the opportunity for our team to do what they love has been a key element of the success of the Surf City USA Marathon,” said Kathy Kinane, president of Kinane Events.

Managing top quality events like the Carlsbad 5,000, the Nike Run Hit Wonder and the PMCU O’side Turkey Trot has become a tradition for Kinane Events over the past 22 years. Once again, this year’s Surf City Marathon and Half Marathon experience promises to inspire new runners and old to achieve their personal running goals. This fast course was made even faster this year with the resurfacing of PCH, which should be an extra surprise for the lucky participants who registered before the event sold out.

For more information on the Marathon, please visit www.runsurfcity.com.

About Kinane Events:
Established in 1991, Kinane Events, has made a measureable impact on many of
California’s largest running events. As general manager of Elite Racing, Kinane Events’ president Kathy Kinane, managed the Carlsbad 5,000, during five of its first seven years (1988 to 1993) as it grew from 2,200 participants to 6,500. During this period, the Carlsbad 5,000 developed a stellar reputation as one of the top 5Ks in the country. After leaving Elite Racing, Kinane was voted Race Director of the year by Competitor Magazine in 2000. In that year, the Kinane Events team produced races that attracted over 60,000 runners, including the Orange County Race for the Cure, which was recognized by Running USA as the 10th largest race of any kind with 28,000 registered runners. Currently the company produces the Surf City USA Marathon, Pacific Marine Credit Union O’side Turkey Trot, Santa Anita Derby Day 5k and the Surf City Beach Derby 10 Mile/10K and 5K Beach Obstacle course. In 2007, Kinane Events, created the Move Your Feet Before You Eat!® Foundation, which has given over $120,000 to North San Diego County Charities since its inception in an effort to inspire a new generation of active families.