Suspenseful plot with plenty of action, emotion, and gun fights. 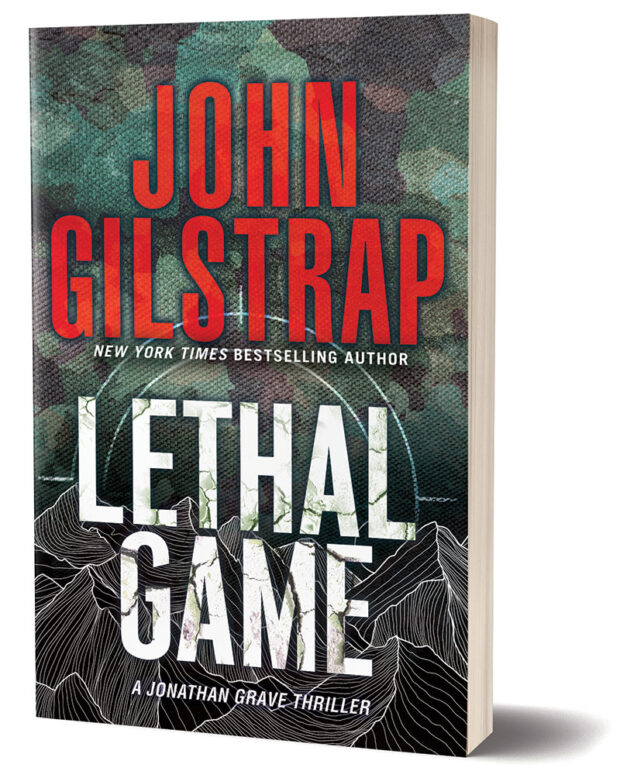 Lethal Game by John Gilstrap will remind readers of another thriller writer.  Gilstrap has a lot in common with Vince Flynn besides a fantastic, formidable character named Irene.  They both have great suspenseful plots with plenty of action, emotion, and gun fights, as well as very well-developed characters who make up the team.  This is Part I and Part II will delve into the books that introduced the characters.

This plot turns the usual story on its head with the hunters becoming the hunted and the team needing to rescue themselves. The crew of Gail Bonneville, Venice Alexander, Jonathan Grave, Brian Van Muelebroecke (Boxers), and Irene Rivers, must find out who is sending assassins. Usually, the team of covert hostage rescuers finds the kidnapped victim with the bad guys having their demise. But in this case Jonathan and Boxers, while hunting in Montana, are the targets.  That attack is coordinated with attacks home in Fisherman’s Cove, Virginia where Gail and Venice are also fired upon. The enemy is unknown but it’s clear they want revenge and will go to great lengths to destroy everyone on the team. The four, while investigating, know they must transition from defense to offense and take the fight right to the enemy. Readers are able to get into the minds of the characters, feeling as if they are being spoken to themselves.

In this series, readers should not expect innocents to escape the violence.  Elderly characters and children are put in harm’s way and do not escape with their lives.  The bad guys are cartel members and just as in real life Gilstrap shows the intensity of violence where they have feelings of anger, disgust, and contempt.

This plot is fast-paced, engrossing, and intriguing.  If this book is someone’s first introduction into the series, they will realize what they have been missing and want to read the earlier novels.  It is written as a stand-alone so no one will have any trouble keeping up.

Elise Cooper: How did you get the idea for the series?

John Gilstrap:  This is the 14th book in the series with the same characters, and it will not end anytime soon.  The idea for the series came from a non-fiction book I wrote, Six Minutes to Freedom back in 2006.  I had extraordinary access and did a lot of research about the Special Forces Delta Force group. I then decided to write a fictional book with a group that does the hostage rescue domestically. I stay in the Western Hemisphere for the team, with the cartels as the bad guys.

EC:  Can you tell us a little something about the non-fiction book?

JG:  Kurt Muse in the late 1980s did a clandestine radio campaign urging the people of Panama to rise for freedom. He was subsequently arrested, imprisoned, and rescued by the elite Delta Force. After the US invaded Panama, they rescued him from the prison where Manuel Noriega held him as a political prisoner.

EC:  Did your professional experience help you to write the series?

JG:  For fifteen years I was a firefighter and EMT. We had a very good sense of camaraderie and mission.  We wanted to make sure the mission was accomplished quickly, efficiently, safely, with as many lives saved. This focus was built into me, which I gave my characters.  I want to show in the books how violence is real and happens with blistering speed that has devastating consequences, which is why there are civilian collateral damage.

EC:  Are you a hunter considering there are details about hunting?

JG:  I am recently a hunter, having moved to West Virginia. I hunt deers and hogs.  The look and feel for hunting is from personal experience.

EC:  How did you get the idea for this story?

JQ: It occurred to me on a hunting trip. I was in a shed waiting for a hog to come by.  I sat for a long time and just was thinking. I realized how vulnerable I was if someone wanted to hunt me while I was hunting an animal. This was the beginning of the plot where someone was hunting for Jonathan and the team, with the rest of the book solving the question, who and why were they hunting the group? In the previous book, Stealth Attack, I opened the door for why they were being hunted.

EC:  How would you describe the team?

JG:  Gail is the adult in the room. Boxer is the violent one. Jonathan is the thinker. Venice is the computer hacker with many skills.  They share a very strong ethical and moral standard that centers around justice. Good and bad for them is not defined as legal and illegal. They have a passion for the mission. They are all gutsy, loyal, intelligent, feisty, adrenaline junkies, and risk-takers.

EC:  You have a quote in the book which explains their thinking and mission.  Please explain.

JG:  You are referring to this one, “While Feebs and local Swat teams were consumed by cumbersome procedures designed to cover their asses and rights of the bad guys, Jonathan and his team did what had to be done and left with the hostages that they rescued.” I have many good friends that are on hostage rescue teams and Swat teams.  In the US when someone is kidnapped their primary mission is not to rescue the hostage.  Their mission is to make sure the bad guy does not legally get away. But of course, they want the hostages rescued.  The regulations require that warrants are issued before they can crash a door or listen in. If they violate those rights, then the case gets thrown out in court. Jonathan and his team does not have that burden. I also put this quote in the book, which was told to me by a friend, “A hostage situation is a homicide in slow motion.”

EC: How would you describe Irene?

JG:  When the team utilizes FBI Director Irene Rivers it must be off the record. They operate in the place of justice, not in the place of legality. Her name came from my mothers-in-law first name. She was first introduced in 1998 in my second book, At All Costs.  She is a single mom and used to be a badass field agent. In the story, Soft Targets is where Jonathan meets Irene after her children were kidnapped.  She is much more politically aware and savvy than the rest of the team.

EC:  In your book world there are no term limits for the US President?

JG: President Tony Darmond is very corrupt without any moral standing.  He has been President for fifteen years because I do not advance time. Irene must work behind the scenes to make sure nothing goes back to Darmond. Her and Jonathan’s team realize politicians do not want to solve problems. I think these books are very timely because of Fentanyl coming across the border plus how the Cartels are involved with the human trafficking trade.

EC:  Why compare the team to Batman?

JG:  My son who is now 36 has always been fascinated with everything Batman.  I brought Batman in because it is an Easter Egg for me and the family. Every book has a reference to Batman. The team and Batman are similar in that they are the strangers who sets things straight, wants justice, and works outside the lines.

EC:  Your next books?

JG:  My next book is not a Grave book.  It is titled White Smoke, the third book of a trilogy coming out next March.  It features Victoria Emerson, a former Congresswoman.  She is the leader of a society after a nuclear holocaust that is trying to put the world back together.

The book I am writing now, the next Grave book, will probably take place in Venezuela but will also bring in some Russian activity. It is called Harm’s Way where missionaries are kidnapped. It comes out in June of next year.