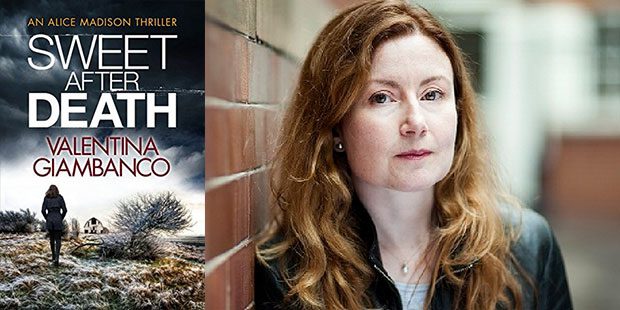 “Sweet After Death” by Valentina Giambanco is a riveting police procedural with a fascinating look at small town life. The opening bone-chilling scene has a brutal murder that sets the stage for the rest of the novel.

Seattle detectives Alice Madison and Kevin Brown along with crime scene investigator Amy Sorensen are sent to the town of Ludlow to help the very small police force investigate the killing of a well-respected doctor. The brutality of the cold winter weather matches the horrific way the doctor was killed. Ludlow is located a few hours from Seattle within the mountainous backdrop. But, as the inquiry takes hold, events seem to spiral out of the Seattle investigator’s control.

During the Memorial Service, the killer strikes again, murdering another town’s member and having the three Seattle police officers under siege. As they become targets, Madison and her team realize they must find the murderer before he or she strikes again.

The trick for the author was having the Seattle detectives travel to this small town and assist in the investigation.

“I had them called in by the police chief for support,” Giambanco said. “It was the county’s first murder and they needed their expertise. I made sure the conflict between the city and town law enforcement was superficial. I wanted them to get along and help each other. Seattle and the surrounding areas have a perfect landscape for crime writing. Washington State has cities, a wilderness, that are close by. I had a huge range of options of what my characters can do. I always think of the environment when writing a story. For this book, I knew I wanted to have a remote isolated small town surrounded by the mountains. The actual town is a combination of Friday Harbor in Washington State and Banff, a Canadian national park town.”

The investigation leads to a survivalist, Jeb Tanner, living in the woods with his 12 children. He has his children taking turns between the hunter and the prey with the loser locked in a hut. They are terrified of him, fearful of his wrath.

One of the youngsters, Samuel, has a compelling story that seems very similar to what Madison went through as a child. He wonders what happened to his mother and older brother and puts his faith in Madison, hoping she will help out. The comparisons and insights with her past are some of the most interesting aspects of the plot.

“I am fascinated by people who lead this kind of life,” the author said. “They barricade themselves on their land and bring up their children in an isolated environment. They are inaccessible to others of their own age, the Internet, and television. I always wondered what are their hopes, dreams, and fears. I think the child Sam and Madison are related because of her own experiences. Living in the wilderness makes it very important. Alice as a girl was kidnapped by a hunter. He blurred hunting for animals and people, something Sam’s father does as well. The hunter Alice had to deal with roamed the mountains and national parks to find groups of people to pursue.”

This story involving lies and deceptions fosters an intriguing mystery. The author uses the environment to create a creepy atmosphere that includes the mountains and forests surrounding the town.