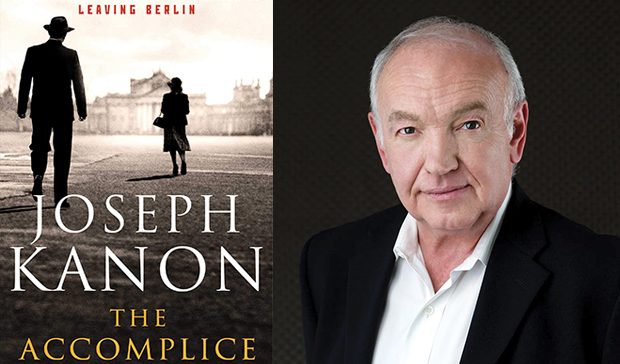 The Accomplice by Joseph Kanon shows why he is one of today’s best espionage writers.  Not only is the story thrilling but it also explores some very moral questions.

The plot opens in 1962, seventeen years after the defeat of the Nazis. As Nazi hunter Max Weill is in a café with his nephew Aaron, he spots the notorious concentration camp doctor Otto Schramm, who worked with Mengele, “The Angel of Death.” Max spots Schramm walking down the street, but many question his observation since Schramm is supposedly dead.  It was reported and confirmed he died in a car accident two years ago. Knowing he is about to die Max convinces Aaron to pursue Schramm and seek justice for his war crimes. The search leads Aaron to Buenos Aires where many Nazis were protected by the Juan Perón regime. Even though Peron had been overthrown, the current regime does nothing to out the Nazis living in their country. Wanting to keep a promise to his dying uncle, Aaron pursues Schramm back to Argentina and the chase begins.

“Ever since I wrote The Good German I thought how is justice rendered for an unthinkable crime? Who becomes the judges?  The Eichmann trial ushered in a new wave of how people searched for the Nazis.  It would not be so easy for them to get away.   I wondered how the other Nazis felt when he was caught.  I think many of them changed their lives and became running scared.  In this story the Nazi, Schramm, fakes his death to be out from the running fear caused by Eichmann’s capture. Before the capture, many of the Nazis did not even change their names because they felt so secure.”

In the vastness of Argentina, Aaron knows he can only find Schramm if he pursues his daughter Hanna. This is where the moral questions begin.  Should she be blamed for the sins of her father? How could she have any affection for such a monster; yet, he was her loving and doting father. Should she confide in Aaron with information? After meeting Hanna, the two have a love affair so how can Aaron reconcile wanting to capture her father and bring him to justice? Eliciting the help of the Mossad, Aaron is confronted by their desire to kill Schramm instead of going through a trial. Should Schramm be killed or put on trial? The Mossad argues by killing him, other Nazis will always look behind their backs with the fear they might be next.

“I wanted to show Hanna as troubled, damaged, haunted, and wounded. Being the daughter of such a father gave her extraordinary emotional conflict.  He was her father, someone she loved, but he was also morally bankrupt.  Someone who actually participated in the atrocities. I hope the reader likes and sympathizes with her. While Aaron is someone who feels a moral sense of duty and obligation, and is a stand-up guy.  He was devoted to his uncle and wanted to get justice for him.  He was determined to put Schramm on trial to get justice rendered. He never lost sight of what Schramm really did and wanted him to have to take responsibility.”

This story will grab readers’ attention from the very first page and never let up.  It reminds people how complicit the world can be and why it is so important to keep the memory of the Holocaust alive.