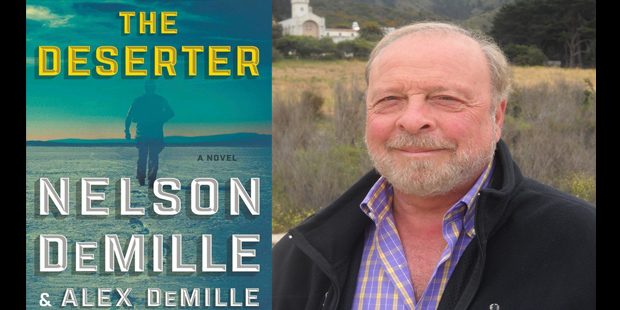 The Deserter by prolific author Nelson DeMille is co-written with his son, Alex DeMille.  Readers will not be disappointed.  After all, what is there not to like with a DeMille novel.  It has a thrilling mystery, engaging characters, and humorous/sarcastic banter.

The story seems to be based on Bowe Berghdal, a US soldier stationed in Afghanistan who walked away from his post, had two of his peers killed trying to find him, and was caught by the Taliban who kept him in supposed captivity. But then the plot takes a twist and turn. Delta Force Army Officer Kyle Mercer, the Berghdal supposed character, has escaped the Taliban by beheading his captors and fleeing to Venezuela. After being spotted by an old army buddy the top military brass decide to send two members of the Criminal Investigation Division (CID) to that socialist evil country to find Mercer and bring him back for trial of desertion. Scott Brodie, a former infantry soldier in Iraq, now a top CID investigator is teamed with Maggie Taylor a former Civil Affairs E-5 in Afghanistan, who is working for CID. While Brodie is wise-cracking, arrogant, and someone who has trouble following orders, Taylor is a by the books person who tries to rein in Brodie.

As the investigation takes hold it becomes apparent that there is more behind Mercer’s desertion.  Brodie and Taylor find disturbing and treacherous secrets by lofty officials in the military and intelligence agencies. The question becomes has the government been involved in immoral activities, in other words it is the deep state implementing unethical deeds.  This is what DeMille is best at, offering conspiracy theories to make a riveting storyline.

The DeMilles have written a classic Nelson DeMille book that has politics, espionage, and suspense. Readers are taken on a roller coaster ride in this action-filled story. An added bonus is the description of Venezuela in historical terms where it has become a “country on the edge, economically desperate, with weak and corrupt institutions and a government openly hostile to American interests.”

Nelson DeMille: This profession was chosen because they can travel anywhere in the world. If we had chosen local cops then the setting would be stuck in a particular municipality or if Federal Agents like the FBI they would be limited to mainly traveling around this country.  The CID has authority wherever this is an American military base.

EC: Why have a co-author?

ND: It was proposed to the publisher as a co-authored three book series.  Before deciding on my son Alex, I had another co-author.  The plot did have a CID guy partnering with a female.  But the setting was in Paris, which has no life to it.  What is the worst thing that can happen there; the character would eat too much rich French food? Plus, the first-co-author was just a schlub. After Alex took over, he decided to set the story in a dangerous place, Venezuela, and really developed the female character.  Now the story took on a new life.

ND:  Somewhat.  He was the impetus of the novel, but there was a departure from his story compared to what happened to the character.  Alex did a lot of research so we had a feeling for the case.

EC:  What was it like writing with your son?

ND:  It was a challenge.  We would email each other back and forth.  He wrote the first draft of every chapter and I played editor.  I also did some inserts, re-writes, and did an overall tough editing.  When it was completely finished we went page by page looking it over.

EC: What was it like writing with your dad?

Alex DeMille: It was educational.  I was optimistic and knew it would work since he has been writing novels for so many years.  This time around I did not feel his equal. I took all his feedback seriously.  After all, the book had his name on it so it had to be a good story.

EC:  You like to have CIA characters with the name Ted?

ND:  The common denominator is that they both are cops so they have the same mindset. We changed Brodie purposely by giving him a rural background from upstate New York rather than growing up in East Manhattan.  We also made Brodie’s thinking different than Corey although the sarcasm is the same. Both are arrogant, smartasses, macho men. Much of this banter and the military jargon was written by me.

AD:  Brodie is the architype that my dad writes, the wiseass intelligent rule breaker, but I made him more responsible than Corey who takes pride in people underestimating him. I wrote this book in the third person, similar to what my dad did in his earlier novels. I wanted to distinguish this book from the John Corey books.

ND:  Operation Phoenix, yes but not Operation Flagstaff; although I hope it seemed realistic and plausible.  Someone once said Afghanistan is Vietnam without the jungle. Both are guerilla wars.  In Vietnam, the killings were up close and personal, while in Afghanistan the drones do the killings of a bunch of Taliban.  In both cases there were civilian casualties.  In Vietnam, the CIA recruited army officers to do their dirty work. In the book, we wanted to make Operation Flagstaff similar to Operation Phoenix, which is why there is this quote, “Special Ops became black ops when the CIA got involved as happened in Vietnam.”

EC:  Did you read any of your dad’s books for background?

AD: I read the book before this one, The Cuban Affair. Because I adapted the screenplay, I read Spencerville numerous times. I did read The General’s Daughter and Up Country because the main character was a CID officer. Some of the darker scenes I wrote humorlessly, but my dad is really good at being able to write some humor where life at its worse. Sometimes my dad would add some humor to it.

EC: What research did you do?

AD: I spent a lot of time on Google maps to make a map of Caracas. I had a sense of what the topography was like.  I also found videos on YouTube and spoke with a number of Venezuelans who left and were able to give me the subtle cultural and political understanding.

EC:  How would you describe the bad guy, Kyle Mercer?

AD:  He was patriotic and a member of an elite force.  Mercer was taken advantage of by the powers that be and came to a place where he no longer respects authority.  Because of what he was asked to do he lost respect for himself.  I would compare him to the Frankenstein monster character.  They were put on this destructive path, but it was not their fault.

EC:  Where is the relationship going with Brodie and Taylor?

AD:  I like to tease what will happen like a TV show such as “Friends” with Ross and Rachel. Both are very job oriented and are tied to the career.  They want to be good partners and not wreck it up sexually.  I want it to be organic to the story.

EC:  What do you want the reader to get out of the book?

ND:  My intention is not to run down the military.  I wanted to make it clear that even though my bad guy is military, he is rogue, and is not what the military is about.  I did contrast him with the CID officers Scott Brodie and Maggie Taylor to make it clear this was not an anti-military/ anti-war book. It is about people who volunteered to serve, some doing it right and some doing it wrong.  I am personally pro-military and hope it comes out in the story.

AD:  The setting is in Berlin. It will be out in Autumn 2021, and Brodie will still partner with Taylor.  In the next book, my dad and I will not do this back and forth editing, but will have a different process than what we did with this book.

ND:  I am working on the eighth John Corey book, probably out in 2021, and called The Maze. This book opens exactly where Plum Island opened, with Corey at his Uncle’s house and chilling on the back porch.  He hears footsteps and sees Beth Penrose, a Suffolk County police detective. Since he is now estranged from his wife there is a little re-spark between John and Beth.  She offers him a job as a private investigator in the Hamptons.  After he takes the job, he gets involved in something much bigger than he thought.

EC:  Is there going to be a TV series on John Corey?

ND:  Still working on the series.  The screenplay for the first proposed episode in the TV series changed everything so much he was not even John Corey.  It made no sense and was just awful.