‘The Earl and the Enchantress’ 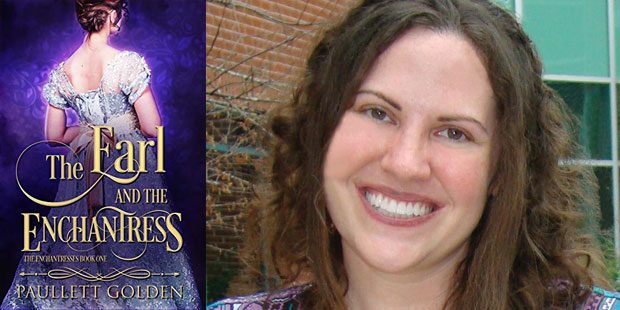 “The Earl and the Enchantress” by Paullett Golden brings to life the 1790s in this historical novel with a touch of romance. As an English professor at the American Military University, she has decided to become an author as well.

In this debut novel her heroine lives in King Arthur’s birthplace, while the hero lives where King Arthur supposedly died. Throughout the story tidbits of King Arthur are weaved as the mystery develops regarding the hero’s haunted past.

The heroine, Lizbeth Trethow, is a “determined spinster and future lady’s companion.” She is resolute not to marry unless the relationship has equality, admiration and passion. She meets Sebastian Roddam, an earl who seems to match her in wit, intelligence and opinions. Neither wants a relationship based on status and wealth.

They also have in common a damaged past. While Lizbeth has met her demons, Sebastian has trouble communicating his fears, guilt and emotional trauma. Their future depends on Lizbeth slaying the metaphoric ghost that battles Sebastian as she unravels the truth.

Anyone looking for an author that weaves into a story realistic characters, a powerful setting and historical facts should read Golden. The only disappointment in this book is that it ended and people have to wait a few months for the next installment.

Elise Cooper: Rumor has it you have worked with military veterans in the past?

Paullette Golden: I have taught at brick and mortar community colleges and universities. While working at Lonestar College many of my students were military veterans. I noticed more and more veterans were signing up for my classes each semester.

I found out they were telling each other to take my class because I understood their difficulty in slipping back into the civilian world. I was even asked to be an adviser to the Veteran’s Association along with a former veteran. I was honored when I was told I made them feel welcome and comfortable. The work I did helped to get a grant for a veteran’s center. I think we adopted each other.

EC: Similar to those in the military, the story shows the need for understanding each other.

PG: I realized while working with those in the military and their families that it is important to be recognized for who we are and what we do. Since American Military University is an online university with active duty soldiers as students, I wanted to write characters that are personable and are willing to make adjustments for their loved ones. My grandfather was a U.S. Marine who fought in WWII and through him I was instilled with a sense of pride — something I made sure to use as a personality trait with the hero and heroine.

EC: Why did you decide to self-publish?

PG: As a reader, I came across many typos in books. These books were written by many bestselling authors who had big publishing companies. After doing some research I knew that having a named publishing company behind me would not gain me much. In talking to fellow writers, they told me that more of them than not knew of someone who had self-published successfully and would highly recommend it. I looked into the process, liked what I saw, so I made the leap.

EC: What would you consider your writing style?

PG: My books are character driven. I usually have in mind one of the characters. In this book, it was the hero. From that I build their world, the plot, scenes and the conflicts. I know I am going in the right direction when things flow. If I experience writer’s block I know I am on the wrong track.

EC: Why the King Arthur references?

PG: He just came to me as a symbol. It was not a preconceived idea. Sebastian reached a turning point in his life where he needed an idol, someone to look up to. I wanted a male figure to guide, motivate and inspire him. I mixed into the reality, the legend. I think it was in my subconscious since I had taken an Arthurian legend course during my doctoral degree. I went to England for the summer and studied King Arthur from scholars as well as visiting all the places associated with him. I guess all that was turning around in my head.

EC: How would you describe Sebastian?

PG: Intellectual, a dreamer, recluse and loner. Someone who is distrustful, and has a low self-worth. His lack of communication is tied to his childhood where he was unable to talk about his feelings.

EC: How would you describe Lizbeth?

PG: Intelligent, poised, empathetic and a teaser. Someone who is opinionated, candid and headstrong. She is a leader and will put others before herself.

PG: Lizbeth teaches Sebastian how to communicate. As their relationship develops, he becomes more open and trustful. By the end of the book I am hoping that when he is worried or depressed he turns to her and says, “I need to talk about this.” Since she listens with compassion they can work through it.

Hopefully it is implied he will become a fantastic husband. They believe in a pragmatic romance based on the passing of knowledge, equality, and inspiration along with respect and affection.

PG: Don’t follow the crowd. They definitely follow the beat of their own drum and were outcasted for this. They never depended on society for an opinion and were willing to separate themselves from society.

PG: I wanted it to be the Enlightenment Period with the philosophies, science, discoveries and the friction between science and church. The hero and heroine are steeped into the intellect of the times. It was a time where there was political tension because of the desire to be free from tyranny. The characters saw breaking away from society as breaking away from tyranny. They were the embodiment of the Enlightenment period.

For example, Sebastian plays devil’s advocate to Lizbeth’s opinion that women have no choices. He says men are just as trapped as women within societal rules. Through the hero and heroine, I am able to present the different world views and philosophies. They will likely have lively discussions the rest of their lives.

PG: It will be out in March and is titled “The Duke and the Enchantress.” It is the story of Lizbeth’s sister Charlotte and the Duke of Annick, Drake, whom she will marry. Where the current book is dark, it is not the case with the one out in March. Because Charlotte and Drake were not very likable, I hope in their book I reformed them and showed them to be empathetic and interesting. In the next book, Sebastian and Lizbeth only make a cameo appearance but are prevalent in the third book that concentrates on Sebastian’s sister, Lilith.