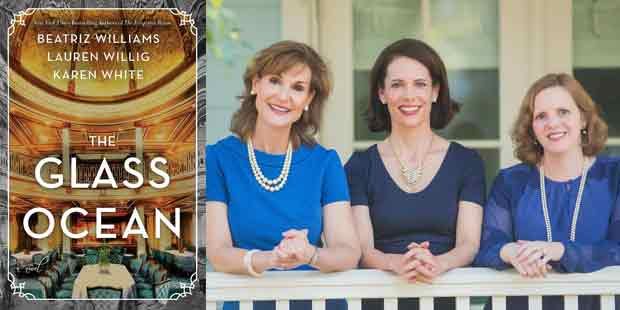 “The Glass Ocean” by the three Amigos, aka Team W, Beatriz Williams, Lauren Willig and Karen White, is a captivating mystery that has as its backdrop the Lusitania and its sinking. As with all good teamwork they effectively created a story that blends their three styles into one.

The authors noted, “It was on our mind because of the 100th anniversary. We thought that it might be cool to write about it. It is an interesting issue since there are so many questions that continue to this day surrounding the sinking by German U-boats. During those times, it was the convention to leave cruise ships alone. Back in the day there was this concept of honor regarding rules of war. Let’s remember there was the Geneva Convention. The sinking of the Lusitania was a calculated act of war that targeted the ship. The Germans even published in the NY Times a warning that passengers would sail at their own risk.”

Readers take a journey with the characters as the suspense ratchets up to that fateful day when the Germans sank the Lusitania in 1915, leaving people to wonder who will live and who will die. Telling the story are three women narrators, two a century in the past, and one in the present time. The first character introduced is Sarah Blake who in 2013 is a struggling author, looking to replicate another number one bestseller. After having all her ideas dry up she decides to open an old chest that belonged to her great-grandfather, who died after the RMS Lusitania was torpedoed. She begins to wonder if these artifacts influenced the sinking in any way. She uncovers a connection between her great-grandfather and a passenger, Robert Langford. who were both on the Lusitania. Deciding to go to England, Sarah meets up with John Langford, a descendant of Robert, who finally decides to work with her to uncover some mysteries and a possible betrayal aboard the ship.

“We wanted to have Sarah supporting her mother who has Alzheimer’s Disease since many of us are at an age where children are taking care of their parents. It is the gate that made Sarah realize she needed to do something to help support her mother’s care. Since this story is about figuring out the past we wanted to show readers that family memories could be lost because of this disease. It is losing the person we knew, which is very hard and cruel. Sarah was very nurtured by her mom. They were always there for each other, but it caused her to have problems forming relationships with people. Her mother leaned on her and she was her mother’s best friend.”

Rewind to 1915, on the Lusitania. Through the interaction of the characters people learn about this ocean liner. Class played such an important role where lower-class passengers are taboo from moving around the ship, limited to their designated deck. Yet, some are able to sneak to first-class as was the case with Tess. She is actually there as part of a con team now led by her sister, who wants her to forge a Straus manuscript. She has promised herself that if they can pull off this one last job aboard the Lusitania, she will finally leave the game behind. Another passenger, Southern belle Caroline is traveling with her husband Gilbert who has become distant and secretive. Robert an old-time acquaintance of Caroline steps in, substituting for Gilbert during his long absences. Robert becomes part of not one, but two love triangles. Will Caroline stay with Gilbert or leave him for Robert. Will Robert choose to be with Tess or Caroline? Nothing appears straight-forward as the different mysteries unravel.

Tess and Caroline are different in many ways but they both have commonalities. “We wanted to explore how they were strong women, and all survivors in their own way. They are not at great places in their life and tried to create something new out of something terrible. When something happens in life people can use it as an opportunity of despair or an opportunity for renewal. They were able to take stock regarding what was important to them, and were looking for a new direction in their life. Tess was influenced by her Irish American background while Caroline is a Southern belle.”

This captivating mystery delves into secrets, betrayals, and what it means to love someone. The description of the ship is so detailed it will make readers feel they are taking the journey with the characters. Each of the women are strong-minded, and distinct from the other two making this story a spellbinding read.