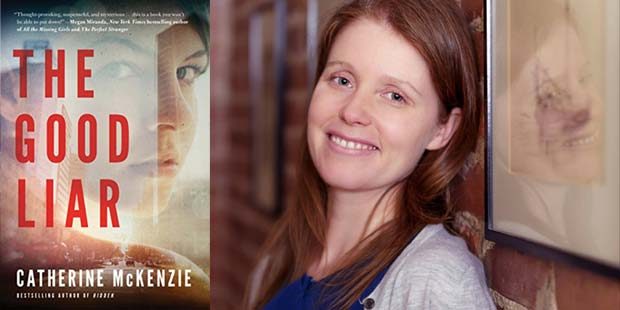 “The Good Liar” by Catherine McKenzie has a theme of betrayal with the backdrop of a horrific tragedy. Readers will be reminded of 9/11 or the Oklahoma City bombing, and the victims, those that died and those that survived. The story is told through the lives of the women affected, characters that present different faces, the public one and a masked one that they hope to keep secret.

“There were a couple of threads coming together,” McKenzie said. Years ago, after Sept. 11, I remember seeing the chainlink fence where the missing photos were posted. I had a thought, could one of these people have used the tragedy as an opportunity to disappear. I did not want to mimic the actual event, but it was in my thoughts. It was not set in New York, but in Chicago, and I tried to move away from the rawness of Sept. 11. I had a lot of friends living in New York on that day. One of my friends had been in the adjacent tower. I do remember watching the events unfold and wondering if my friends were OK. My husband and his mother were in the Twin Towers a week before during that time of the day.”

When a gas explosion rips apart a Chicago building, the lives of the women are forever altered. More than 500 people killed and thousands more have been wounded. To honor the one year anniversary, Teo Jackson films a documentary about the “Triple Ten Explosion,” which happened on the 10th month, the 10th day, and at 10 a.m. The past and present perspectives of Cecily and Kate are told, while Franny’s story is told in the documentary interview transcripts.

“I wanted a writing challenge,” the author said. “I know as a writer I have to create a three-dimensional world of rooms, smells and sounds. There was a tool taken away from me. With a transcript, you don’t get to say how the person was feeling or have access to their internal thoughts. As a lawyer, I read a lot of transcripts. It is interesting to me what can get lost from actually being in the room to reading the transcripts. It seemed at times it was not how I remembered it — yet, there it was on the page. Even in a documentary people have a narrative and can manipulate the story.”

A year ago, Cecily was photographed in a timeless shot capturing a pure moment of shock as she stands there staring at the wreckage, fearing her husband, Tom, and best friend, Kaitlyn, have been killed. On the anniversary, she has survivor’s guilt, knowing she was supposed to be in the building that day, but per usual was late. Another victim, Kate ran from the scene of the explosion, deciding to leave behind her young children and husband. She escapes to Canada hoping to make a new life for herself and that her past secrets won’t catch up with her. The third person, Franny, resents her life after finding out she was adopted and that Kaitlyn was her mother, but fate ends any attempt with reconciliation.

This is a complex story that delves into the lives of the victims. It has a major twist towards the end of the story bringing the women together in an unexpected way.