‘The Hazards of Good Fortune’ 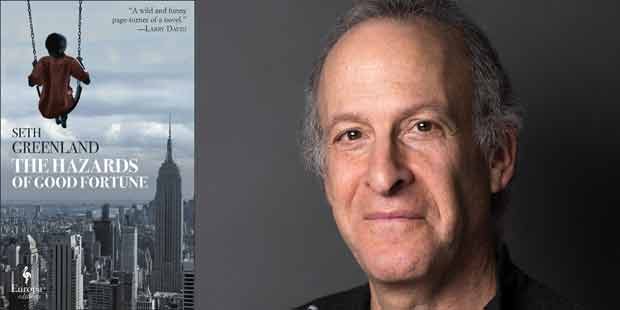 “The Hazards of Good Fortune” by Seth Greenland explores why society is less forgiving today than in the past and relies too much on the court of public opinion. He delves into the issues of race, religion and how they are intertwined.

Greenland wanted to write a story centered around “a New York real estate mogul that takes some events of Donald Sterling’s life.”

“I thought Sterling got everything he deserved, but it did make me think,” Greenland said. “I actually had a character before I had a story, knowing that I wanted to write about someone tried and convicted before he had his day in court. In my book, people make up their minds before all the facts are.”

The main character, Jay Gladstone is a Jewish real estate tycoon and NBA basketball team owner who’s proud of his philanthropic efforts. His star player, Dag Maxwell, wants a contract renewal with a lot of zeroes at the end of his payment. Things turn upside down when Jay finds him in bed with his wife, Nicole, and then accidentally runs over him as Maxwell runs out of the house.

Jay is also contending with Nicole’s desire to have a child, which goes against the signed prenup, as well as his college-aged daughter, from a previous marriage, that has very radical political ideas. But nothing compares to a statement he made that goes viral, “Why does everyone in this family need to have sex with black people?”

“I wanted to explore the idea of intersectionality and question if it excludes Jews,” Greenland said. “They are not considered a persecuted minority. There seems to be a ladder of grievance. In the ’50s, ’60s and ’70s being Jewish was considered a cool thing, but it no longer is. I write about this in the book and how that nuance got lost. Power structures are now being challenged. Our society is at an inflection point, and I thought this the right time to wade into the national conversation. Jay is a good man that makes a terrible mistake and he has his life destroyed because of it. I think he is a flawed individual who is intelligent, big-hearted, wealthy and is clueless about what happens to him societally after he let his emotions get the better of him.”

Through the plot and characters, Greenland makes a statement about today’s divisive society. A book quote hammers the point home, “Nowadays personal destruction is a sport.” Because of life’s circumstances, Jay sees that he has become public enemy number one, with everything spiraling out of control.

“I wrote this scene in the NBA offices where Jay uses the phrase ‘sold down the river,’” Greenland said. “Someone tells him that he should not say it because it refers to slavery. It is so obvious that Jay meant it as the current day reference and did not even think about the latter-day meaning. We are in an environment where people are just looking for things. The extremists on the left and right have hijacked the dialogue with the media amplifying everything and the Internet is the accelerant.”

This book shows through each of the characters how good people can do bad things and the result is having their life blown up. Through Nicole, Jay and Dag the issues of race, religion, class, money, sports and politics are explored. It is a tragedy with some humorous scenes that at times are witty and at other times biting.