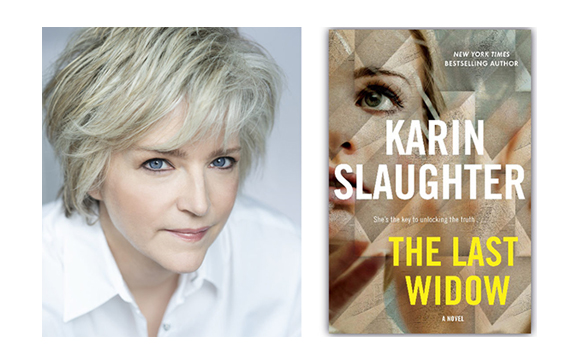 The Last Widow by Karin Slaughter delves into a potent subject. Although a fictional story, it is rooted in reality. The recent rise of domestic terrorism is brought to life with the return of her beloved characters, Sara Linton and Will Trent, who have returned from a few years hiatus.

The book opens with the kidnapping of Michelle Spivey, a scientist from the Center for Disease Control, who appears to have vanished in thin air. One month later two blasts shatter Emory University in Atlanta Georgia. Hearing the blasts, Medical Examiner Sara and her partner Will, an investigator with the Georgia Bureau of Investigation, rush to the scene, but stop when they encounter the aftermath of a three-car collision. Realizing something is amiss, Sara tries to alert Will. But the men in the cars beat Will to the ground and whish Sara off to a mountain encampment of the Invisible Patriot Army, a White Supremacist paramilitary unit.  Readers will experience through Sara’s eyes the sense of panic, fear, and the horror of these merciless terrorists.  Using time as a tension tool, Slaughter allows readers to understand there is a ticking time clock to stop this group from executing a deadly plan that could kill thousands. Will and Sara put their lives on the line to save each other and their fellow citizens.

This novel has a correlation between white nationalist domestic terrorists and those with US military-backgrounds. “I wanted to show how these men come home from war feeling disenfranchised, broken, and discarded by their government. They took an oath to uphold the Constitution; yet, take another oath to support these groups. I read a survey of service people who were in Afghanistan that stated about 58% felt the war was useless.  They felt that lives were lost over nothing. I think it is the most horrible thing a country can do is send out our military for something that turns meaningless. We are not taking care of our Vets enough, which is a recurring theme in all the wars. They feel abandoned, isolated, and angry.”

This explosive thriller has many twists and surprises. The plot draws readers into the world of White Supremacists, a frightening scenario that is unfortunately all too real.