The man behind Top Gun 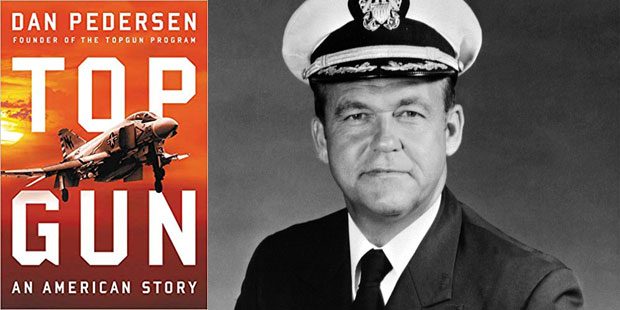 Forget the movie “Top Gun.” This book, “Top Gun: An American Story,” by Dan Pedersen soars into the readers’ minds. On the 50th anniversary of the creation of the Top Gun Navy Fighter Graduate School, its founder shares the remarkable inside story of how he and eight other risk-takers revolutionized the art of aerial combat.

Pedersen, known as the “Godfather of Top Gun,” is credited with establishing the Navy Fighter Weapons School with the help of eight other passionate and talented officers known as the “Original Bros.” (For the purpose of consistency, the spelling will be Top Gun instead of “Topgun.”)

The book is an autobiography as Pedersen reflects on his childhood, why and how he decided to be a flyer. There are also bits of his love life and family life, his military career and his post-military life. He stated why the book was written, as “a legacy for the Top Gun school and teachers and what they accomplished.”

But the most interesting parts of the book is the discussion on how he became the man assigned to creating the school. Many today, can reflect on similar situations with the War on Terror. The bureaucrats and many high-ranking generals thought they knew best until the candid USS Coral Sea Commander Frank Ault spoke out. Already in line for admiral and with nothing to lose, the World War II attack pilot put his gripes on paper in 1968 and sent them to the Pentagon. He listed in detail the problems and the solutions with aerial engagement in Vietnam, in what became known as the Ault Report, and recommended the formation of a school specializing in aerial combat.

Some of the problems included pilots fighting in Vietnam receiving limited training, having faulty Sidewinder and Sparrow missiles and not learning the skills they needed to outmaneuver the enemy. This became abundantly clear with the kill ratios: In World War II the kill ratio was approximately 14-to-1, during the Korean War about 10-to-1, but in Vietnam — before the Top Gun program — it was as low as 2-to-1.

Capt. Pedersen (then a lieutenant commander) was the first officer in charge of Top Gun. He was chosen because of his experiences in the air battles over Vietnam where he received first-hand knowledge of the shortcomings of American tactics and equipment. The “high tech” weapons failed about 90 percent of the time, and the latest fighter plane didn’t even have a gun! American fighter pilots were being shot down by a third-world air force using Soviet aircraft — MiGs. The Navy moved toward radar-guided missiles and aircraft to fire them instead of dogfighting.

The Top Gun School ended up being very successful. The 2-to-1 ratio changed to a 24-to-1 ratio. It became, and still is, run by people with combat experience. It is obvious that Top Gun saved lives and turned the air war around.

Elise Cooper: You had a big gripe with the way planes were made.

Dan Pedersen: Industry designs our weapons and planes. This is still going on today — where no one ever goes into the cockpit and faces the enemy. Those doing the actual fighting do not have a lot to say. The planes did not even have guns because someone in the design industry decided they were not needed. There was a reliance on the missiles, but they never worked. This is what we changed with the founding of the Top Gun graduate school.

EC: Your other big gripe is that Washington politicians were running the war.

DP: If a war is to be fought, guys are asked to risk their lives flying an airplane, competing in real-life combat, decisions should not be made by politicians, but by people on the ground. Robert McNamara, the secretary of defense during the Vietnam War, and President LBJ mandated what went on. World War II was fought completely different where the war in the Pacific was run by two, 4-star admirals and carrier skippers. They had a lot to say in the daily operations and tactics. The motto should be to never send an American into combat unless the intention is to win.

EC: Can you give an example?

DP: McNamara and Secretary of State Dean Rusk, on orders by LBJ, sent the next day’s targets to the Swiss Embassy in Hanoi to let them know where the U.S. would be bombing. The rationale was that there will not be collateral damage and civilians killed. But the Vietnamese used the information for other purposes — instead of moving the civilians away from the targeting areas.

But in reality, they moved the guns and missiles into those targeted areas to shoot at us. The high command was rigid and inflexible. They cared more about the headlines than protecting American pilots. At the time, we never knew we were being used like that.

EC: It seemed, as with today, the rules of engagement tied the hands of those serving in the military.

DP: I knew the F-4 was designed for us to be able to shoot 10 miles away, but the rules of engagement (R of E) said we had to visually see the plane before we could shoot. Flying became a dangerous game of risk versus reward. The R of E negated the capability of what the plane was designed to do.

I think with better equipment and better rules of engagement we could have won the war in six months. If America’s best is sent to war then the strategy should be to win decisively.

EC: Mary Beth and you reunited after many years of separation, so I guess dreams really do come true?

DP: We have been married for 27 years. She is my soul mate. When she was 19, I screwed up the relationship and we did not see each other for 32 years. But thankfully that was rectified 27 years ago. For the book, she is my editor-in-chief.

EC: So Mary Beth can you describe U.S. fighter pilots?

DP: They are very opinionated guys. Very, very intelligent. Handsome, with a certain swagger. They are natural leaders. Very disciplined, focused, confident, humble, self-assured with a good sense of humor.

EC: You have said in the past that you are saddened by the way they were treated.

DP: At the time of Vietnam they did not get any recognition. It was horrible that they could not even wear their uniforms when they came home because people would spit on them.

EC: Dan, you said in the book you miss flying. What do you miss most?

DP: The most beautiful things I saw in the airplane. There would be blue skies and white clouds. One Christmas while flying the F-4 above Las Vegas, I soared to 50,000 feet. It was spectacular with everything I could see. It was a beautiful night with the stars so bright. I turned off my cockpit lights and could read my kneeboard by starlight. It was amazing.

EC: How did you like the movie “Top Gun?”

DP: It was entertaining. The flyers were real Top Gun people. They put cameras on their plane or had a cameraman in the cockpit. The new movie is coming out next year. I will give the film credit for making the school famous.

The part I did not like is that they showed the pilots as a bunch of jokesters playing beach volleyball and riding motorcycles. My original eight guys were very serious about the training. It did not show how serious we were.

EC: What do you want the reader to get out of the book?

DP: My eight bros and I are patriots. This country needs more patriots that put America first. Anyone willing to defend their country should have a voice in combat and should have some control over their own destiny.

I am very proud that my lasting military contribution was Top Gun where the trainees became unbeatable.