‘The Mystery Of Three Quarters’ 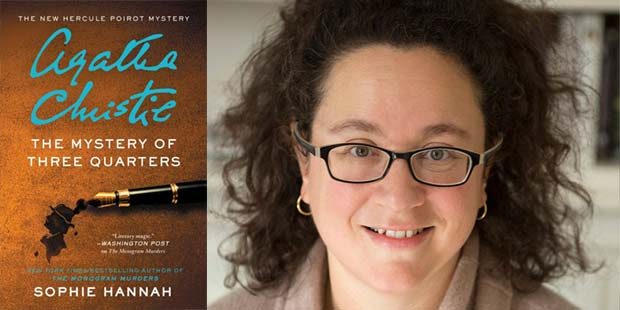 Agatha Christie’s “The Mystery Of Three Quarters” by Sophie Hannah brings to life the famous detective Hercule Poirot. Those who grew up on Christie’s novels will once again be treated to mysteries written in her style. Anyone who has not read the famous novelist will enjoy the plot.

Hannah says she took on this project, “because I was excited about the creative possibilities.”

“I saw her style as eloquent, clear and simple with challenging plots that are more like intellectual puzzles,” Hannah said. “This is my third, and I will have a fourth one coming out. Since I am a massive fan of Christie, I wanted to make sure I got everything correct, so I went back and did my homework. I re-read all the Poirot novels from a more analytical point of view. I had read my first book at the age of 12 and had finished all her books at the age of 14. Because he is such a legendary character I did not change him, loving him as he was. It is the same old character seen through new eyes. What I did change was the narrator.”

As in the previous novels Hannah created, Inspector Edward Catchpool from Scotland Yard narrates the story. This allows the book to be in her voice instead of mimicking Christie’s narrator Hastings. Set in the 1930s, readers find Poirot confronted by Sylvia Rule who demands to know why he sent her a letter accusing of murdering Barnabas Pandy. Perplexed, he is trying to understand what she is talking about when he is confronted again by John McCrodden with the same accusation.

The next day, two others, Annabel Treadway and Hugo Dockerill also come forward with similar letters. It accuses each of killing Barnabas Pandy, a 94-year-old found drowned in his bathtub in Combingham Hall three months earlier. The reactions of each ranged from anger to contempt to sorrow to apologetic. Annabel Treadway is distraught at the accusation since Pandy was her grandfather and tells Poirot that his death was ruled an accident. Deciding to get to the bottom of this mystery the famous detective decides to gather all to uncover who did what to whom and why, while observing their reactions.

“I always thought of Poirot as brilliantly clever, kind, loyal, methodical, with a strong passion for justice,” Hannah said. “He is fascinated by the human psyche and interested in how people behave. Catchpool is clever, nice, faithful, and helpful. He is being mentored by Poirot on how to solve the cases. They contrast with the four accused of murder. Annabelle is obviously sad about something and that piques Poirot’s curiosity. Sylvia is self-righteous and a know it all. John has this adolescent attitude about his father, always blaming him for something. Hugo is a bumbling, absent-minded type.”

This story delves into how people can harm one another. How lies can take root in people’s heads as truths. The theme has characters stubbornly clinging to old grudges. Hannah will continue this theme with a self-help book, “How To Hold A Grudge,” out in January that allows people to hold on to their negative feelings as long as they forgive and find inner peace.